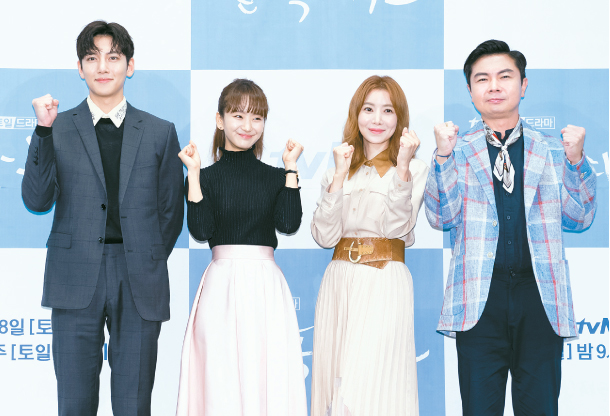 What would you do if you participated in an experiment that’s supposed to keep you frozen for 24 hours, only to find that 20 years have passed when you wake up?

That’s the horrifying situation in which the protagonists of tvN’s upcoming romantic comedy drama “Melting Me Softly” find themselves.

It’s the year 1999, and star TV producer Ma Dong-chan, played by Ji Chang-wook of “Fabricated City” (2017), gets the quirky idea to carry out a “frozen human project” for his new show. He recruits part-timer Ko Mi-ran, played by Won Jin-ah of “Long Live the King” (2019), to join him as the subjects of the experiment, but something goes horribly wrong, and the two wake up in the year 2019.

Although they haven’t aged a bit in appearance, Ma and Ko - each 32 and 24 before beginning the experiment - find the world and the people they most cared about completely changed.

“The idea of a frozen human isn’t easy to materialize,” said director Shin Woo-cheol during a press conference on Friday in southern Seoul. “Although the drama is mostly comical, we deliberated a lot on how to make the transitions from 1999 to 2019 appear realistic.”

An important element in the synopsis is that as a consequence of being frozen, Ma and Ko cannot have their body temperatures go above 33 degrees Celsius (91.4 degrees Fahrenheit) or face risk of death. The physical condition proves to be a serious barrier to the protagonists’ romantic life, which they need to avoid in order to survive.

But as the story progresses Ma and Ko, as the first two people in the world to successfully come out of a frozen experiment, find themselves relying on each other and dangerously falling in love.

Dynamics between Ma and the people that were close to him before the experiment adds tension and complications to the story.

Yoon Se-ah, from “SKY Castle” (2018-19), plays Na Ha-young, Ma’s first love and a news anchor who had to painfully give up waiting for his return due to pressure from the TV network, which tries to cover up the fiasco of the frozen experiment. Fast forward 20 years, and she has risen up in the ranks and has become a bureau chief.

When the man she loved 20 years ago reappears looking exactly as he had before, Na is thrown into confusion and struggles to assess her feelings towards Ma as she warily keeps an eye on Ko.

Lim Won-hee, from “Along with the Gods” (2017), plays Ma’s assistant Son Hyun-ki, who used to obey everything he said.

When Ma returns after 20 years, Son has become a director at the company but finds himself still treating his former superior as if he’s the boss.

“When I first read the screenplay I found the relationships between the characters refreshing,” said Ji.

“I was also happy to do something I couldn’t in real life, as I don’t have to use honorifics toward the cast members a lot older than me in the drama.”

“Melting Me Softly” is also the first drama or movie that Ji is participating in since he finished his two-year mandatory military service.

“I don’t think I changed too much, but I hope that I’ve matured,” he said.

“Melting Me Softly” will begin airing every Saturday and Sunday at 9 p.m. on tvN from Sept. 28.