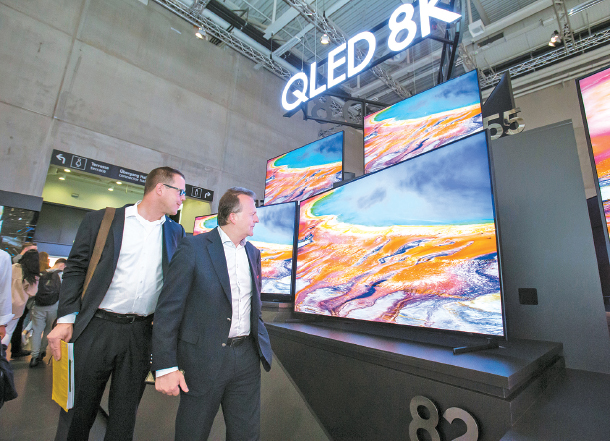 Samsung Electronics has sold more than 5.4 million QLED TVs globally since the lineup launched in 2017, the company said Sunday.

QLED, short for quantum dot light emitting diodes, is the name of Samsung’s high-end TV lineup that has a quantum dot film attached to an LCD screen to enhance the color.

Samsung, a global leader in the television market with a 31 percent market share, said sales for QLED TVs are rapidly increasing each year. During the year’s first half, it sold 2 million units, which is a 127 percent increase on year.

“Our forecast for the year’s second half is 3 million - so combined, our annual performance is expected to increase 92 percent from last year’s sales unit of 2.6 million,” the company said.

In its Sunday statement, Samsung made a brazen comparison with OLED, short for organic light-emitting diodes, TVs. Samsung’s local rival and key competitor LG Electronics is the global leader in OLED technology.

“OLED TV sales in the year’s first half stopped at 1.22 million units, which represents merely 15 percent growth from last year’s 1.06 million,” it said, adding that the “market gap will expand in the course of time.”

Samsung also stressed its upper hand in the competition for large TVs of over 75 inches, which for years have been the main battlefield for high-end TV makers. According to data from market research firm IHS Markit, Samsung took a 54 percent market share by sales in the large-size TV segment during this year’s second quarter.

“Among the QLED TVs Samsung sold in the year’s first half, 14 percent were larger than 75 inches, whereas for OLED TVs, sets larger than 70 inches only accounted for 2 percent of units sold,” Samsung said, implying that its QLED was more popular among consumers of large, and therefore more expensive, TVs.

Samsung’s boast comes amid a row between Korea’s top two electronics company over tech leadership in the TV segment.

Earlier this month, LG called out Samsung, saying that the name QLED was confusing customers. Among engineers and tech experts, a “true” QLED panel has quantum dots emitting light on their own without a backlight, LG claims, but Samsung is nonetheless using the term to sell a product which structurally is essentially an LCD TV with a quantum dot film.