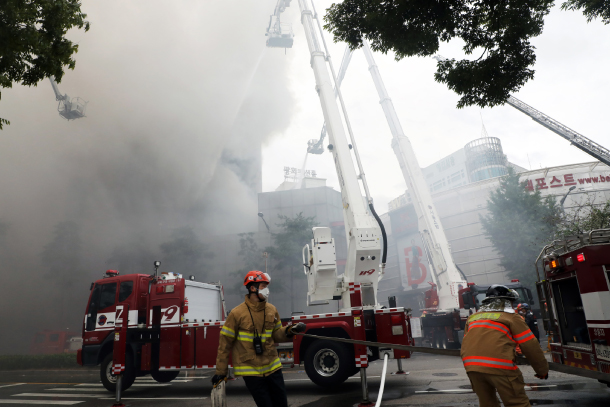 A fire broke out at the Jeil Pyunghwa Market in Sindang-dong, Jung District, central Seoul, on Sunday. The blaze affected two of the eight floors in the market, and two people were treated for smoke inhalation.

According to the fire department, firefighters were called to the scene at 12:39 a.m.

The fire started in a clothing store on the third floor, and it was initially extinguished around 1:30 a.m.

However, it ignited again around 6 a.m. The Dongdaemun History and Culture Park area, near the Jeil Pyunghwa Market, was blanketed in smoke and roads in the area were blocked off.

Four people were in the market when the fire occurred.

Merchants at the Kwanghee Fashion mall, near the Jeil Pyunghwa Market, closed their stores and evacuated around 7 a.m.

A total of 291 firefighters were sent to the site to fight the blaze. It took over 16 hours to completely extinguish the fire due the quantity of fabric and clothing in the market. The first three floors lack sprinklers.

Seoul Mayor Park Won-soon visited the site around 11:30 a.m. and asked firefighters to do their best.

“It is important to extinguish the fire completely before the typhoon comes,” Park said. “Apart from the police investigation, we, at the Seoul City level, need a countermeasure such as special financial support for the market revitalization.”

Seoul Metropolitan Government around 10 a.m. sent a safety message to the people, advising them to adjust their travel plans to avoid the area near the Jeil Pyunghwa Market.