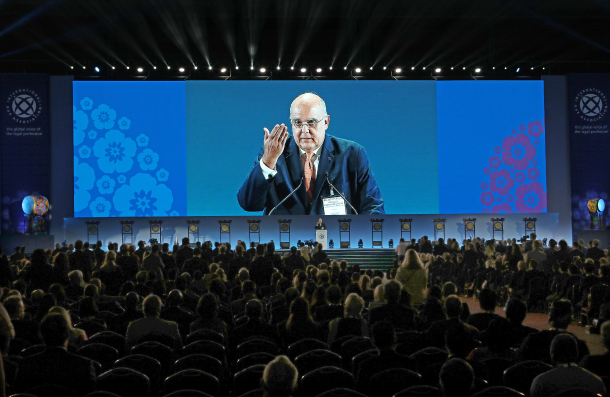 Horacio Bernardes Neto, president of the International Bar Association (IBA), delivers opening remarks as the IBA annual conference begins on Sunday at Coex in Gangnam District, southern Seoul. At least 5,000 people from 120 countries will be visiting Korea this week for the world’s largest international gathering of legal professionals. [PARK SANG-MOON]

The International Bar Association’s (IBA) annual conference, the world’s largest and most prestigious international gathering of legal professionals, kicked off in Seoul on Sunday, with thousands of lawyers from around the globe descending on the Korean capital to exchange their knowledge on a plethora of topics, including the rule of law, human rights and changing legal markets.

It was the first time in the 72-year history of the IBA that Seoul was chosen to host its annual conference. The IBA said in a press release that at least 5,000 delegates from 120 countries representing law firms, corporations, governments and regulators have signed up for the week-long event, which will be held at Coex in Gangnam District, southern Seoul, through Friday evening. Experts and lawyers are expected to discuss salient issues facing the world today in nearly 200 working sessions.

Korean President Moon Jae-in, a former human rights lawyer, said in a video message played during the opening ceremony on Sunday evening in Coex that he hoped South Korea would achieve peace on the Korean Peninsula “not by force but by law and consent,” in an apparent attempt to reassure Pyongyang that Seoul isn’t seeking regime change.

“I hope that the IBA will stand together with us on our journey toward denuclearization and permanent peace on the Korean Peninsula,” said Moon.

At the time the video was played, Moon was on his way to New York to attend the UN General Assembly and hold a summit with U.S. President Donald Trump.

Seoul Mayor Park Won-soon, who was also a human rights lawyer, mentioned various programs he introduced to the city to improve human rights and democracy during a speech, while touching upon the dark Korean history of military dictatorship and repression, and how he joined pro-democracy protests during those times to fight back. 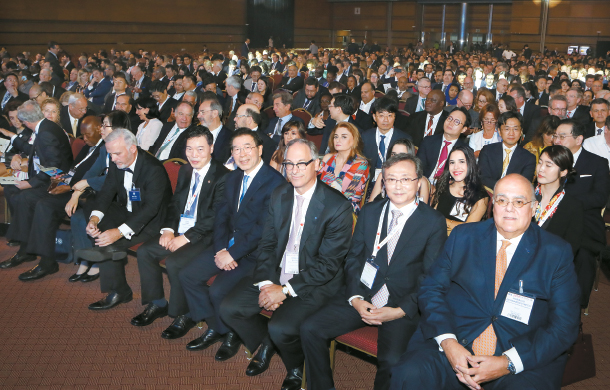 “Throughout the history of Korea, the law was not applied equally to everyone,” said Park. “The law was abused by those in power as a means for violence […] Under the dictatorship, the government violated human rights through numerous incidents of torture, evidence manipulation and suspicious deaths.”

Park said that he ended up in jail in the 1970s after protesting against Korea’s dictatorship, and was subsequently expelled from university, all when he was a freshman.

“I had scheduled a date with a girl on the day I was arrested,” said Park. “I remember I desperately wanted to call her to tell her that I would not be able to meet her.”

Now, with democracy “thriving” in Korea, Park said he was using his background as a human rights lawyer and a civic activist to ensure Seoul citizens play a key role in the city administration process.

“I have launched an online platform called ‘Democracy Seoul’ to allow every citizen to make suggestions for policies, and am pursuing a ‘Citizens Human Rights Jury’ in which the jury, consisting of the citizens, can make judgements on charges of human rights abuses,” he said.

The opening ceremony on Sunday was followed by a welcome party and a K-pop concert featuring budding groups. This afternoon, a former senior official of North Korea, whose name has yet to be revealed by the IBA, will partake in a session that will likely be about his or her insights on the Pyongyang regime.

On Tuesday, the IBA’s War Crime Committee is scheduled to present its report “Inquiry on Crimes Against Humanity in North Korea’s Political Prisons” and invite speakers to discuss avenues for accountability for those crimes as well as the importance of maintaining human rights protection amid denuclearization discussions.

On Wednesday, a session on North Korean investment will examine the restrictions of doing business in North Korea, the North Korean courts and legal challenges for foreign investors.

Other topics throughout the IBA annual conference is expected to include global trade wars and the rise of nationalism, employment issues, cryptocurrency, climate change, arbitration, mergers and acquisitions, and persecution of legal professionals, among others.

Established in 1947, the IBA has evolved from an association comprised exclusively of bar associations and law societies to one that incorporates individual international lawyers and entire law firms. According to the IBA’s website, the present membership of the association includes 80,000 individual international lawyers and some 190 bar associations in more than 170 countries. The IBA’s administrative office is in London and its regional offices are located in Seoul, Washington and Sao Paulo, Brazil.