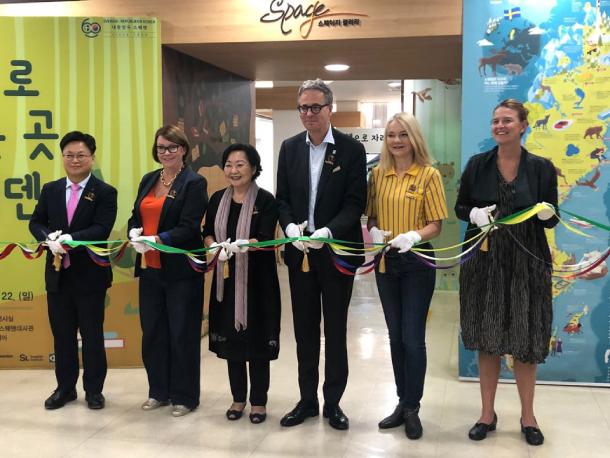 Swedish Ambassador to Korea Jakob Hallgren, third from right; Helena Gomer, the head of public libraries in Sodertalje municipality in Sweden, second from left; Seo Hye-ran, chief executive of the National Library of Korea, third from left; and members of the National Library for Children and Young Adults in southern Seoul, the Swedish embassy and IKEA Korea celebrate the opening of the exhibition “Sweden, Where Children Grow with Books” at the library for children on Friday. [ESTHER CHUNG]

For public libraries to be relevant in a digital world, creative designing, especially from the eyes of a child, is needed, said Helena Gomer, the head of public libraries in the Sodertalje municipality in Sweden, at the opening of the exhibition “Sweden, Where Children Grow with Books” at the National Library for Children and Young Adults in southern Seoul on Friday.

“We held interviews with children aged 10 to 13, and they told us they would like music, books, a kitchen, computers and a swimming pool in a library,” Gomer told a group of librarians and primary school teachers. “We wanted to make a library where they can be as playful and mature as they feel like.”

Gomer introduced several examples of public libraries in Sodertalje municipality, designed with the needs and perspectives of children in mind.

“This library also includes a large kitchen,” she said. “It may be an unusual part of the library, but it is not an unusual part of our lives. So the kitchen fills the same purpose in a library as at home - it is a place to sit down together, do homework, talk and share stories.”

The exhibition, held through Dec. 22 on the library’s second floor, introduces Astrid Lindgren, the author of the Pippi Longstocking series, as well as an example of a reading space in a typical Swedish home. It is called the “Little Library.”

“Little Library is a small space for children where they can lay down on the carpet with a book or a puzzle and step into a fantasy world,” said Swedish Ambassador to Korea Jakob Hallgren at the opening of the exhibition. “Visitors will find that playing, reading and learning are not separate things, but all equally important roads to discovery.

“I am happy to learn that Koreans consider Pippi Longstocking as a family friend, just like in Sweden. ‘Good literature gives the child a place in the world and the world a place in the child,’ the famous Swedish writer of children’s books, Astrid Lindgren, said. My humble wish is that this exhibition will be a library for children and parents to encourage them to read for pleasure.”

“I found the idea of building a library and organizing the books based on the experiences of children very interesting,” said Yoo Kyung-kyun, a teacher at an elementary school in Seoul.