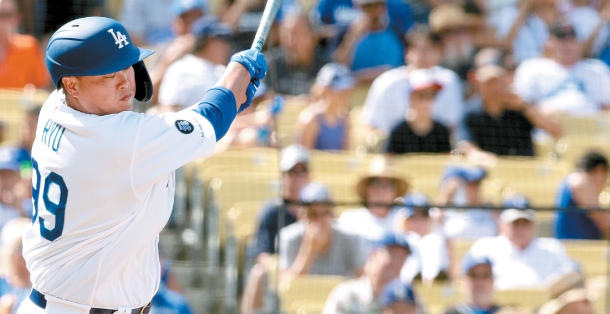 Ryu Hyun-jin of the Los Angeles Dodgers hits a home run during a game against the Colorado Rockies at Dodger Stadium on Sunday. [AP/YONHAP]

In his seventh season in the major league, Ryu Hyun-jin of the Los Angeles Dodgers hit his first-ever home run during a game against the Colorado Rockies at Dodger Stadium on Sunday.

Ryu, who started against the Rockies, got off to a slow start as he allowed the Colorado team to take the lead by giving up a solo home run to Garrett Hampson at the top of the first inning. After getting through the next four innings without giving up an additional run, Ryu took it upon himself to rectify his earlier mistake.

At the bottom of the fifth, Ryu got in the batter’s box as the Dodgers’ leadoff batter for the inning. With no balls and two strikes, Ryu connected with Rockies starter Antonia Senzatela’s 151-kilometer-per-hour (94-mile-per-hour) fastball to send it deep over the fence to tie the game 1-1.

“I wasn’t particularly thinking about my launch angle, especially with two strikes,” Ryu told SportsNet LA in a post-game interview. “My goal was to not give up an out. I’m just thankful it was a day game, because if it was a night game I’m pretty sure [it] would have been caught. I think it was a good home run.”

Ryu not only tied the score but also made headlines with his first-ever home run in the majors.

Following Ryu’s lead, the Dodgers quickly loaded the bases and Cody Bellinger hit a grand slam to lead the Dodgers to take a big 5-1 lead at the bottom of the fifth inning.

After that big inning, Ryu got back on the mound and tossed a scoreless sixth inning but once again gave up a home run in seventh, this time a two-run homer to Sam Hilliard, to allow the Rockies to pull back to 5-3.

However, the Dodgers quickly added another run at the bottom of the seventh and eighth inning to extend their lead for a 7-4 victory. 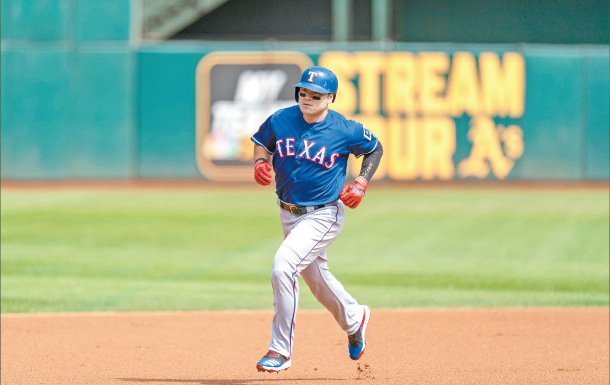 Choo Shin-soo of the Texas Rangers rounds the bases after hitting a home run during a game against the Oakland Athletics at Oakland Coliseum on Sunday. [REUTERS/YONHAP]

Ryu left the mound after tossing seven innings, good enough to give him his 13th win of the season. Throughout seven innings, Ryu gave up three runs and six hits while striking out eight.

A win also allowed Ryu to improve his seasonal record to 13 wins and five losses with a 2.41 ERA.

At bat, Ryu now has a 0.143 batting average with one home run for the season.

“Except for the two home runs that I gave up, I think it was a good game overall,” Ryu said. “First one, I could deal with but the second one was a mistake.”

Once the game ended, Ryu also agreed that his home run was the most important point in the game.

“I would argue that it was the most crucial part of this game to tie the game with my home run,” Ryu said.

“It was a very good one. Thankfully, our team was able to take the lead in that same inning. So I was glad that I was the one to start the inning with a home run.”

Despite it being Ryu’s first-ever home run in a major league game or in his professional baseball career, it seemed as if his teammates were more excited than Ryu.

Ryu said he tried to keep a straight face so that he could continue his momentum for the rest of the game, as he still had more innings to pitch.

“There were chants from the dugout - Babe Ryuth,” the Dodgers manager Dave Roberts was quoted as saying on MLB.com. “It got our dugout going and the fans going. But just the way he threw the ball today, it was back to the old Hyun-jin. His entire mix was good. We needed this from him.”

Ryu, who made his big league debut with the Dodgers in 2013, was given the nickname “Babe Ryuth” - based, of course, on baseball legend Babe Ruth - for his batting potential during his rookie season.

Before Ryu made his KBO debut, he was also a cleanup hitter for Dongsan High School. Due to this, there were high expectations that he would become an outstanding batter and a pitcher in the national league, although pitchers in the KBO don’t bat.

Ryu batted 0.207 in his rookie season, including some big hits. During the 2018 season, Ryu’s batting average climbed as high as 0.269. Despite his pretty impressive batting average as a National League pitcher, he had never scored a home run in 210 at-bats with the Dodgers, until Sunday.

His first-ever home run not only impressed Roberts but also impressed teammate Bellinger.

“He’s unbelievable in batting practice,” Bellinger was quoted as saying. “Really shocking he’s never hit one before. No moment too big for him. I think we were more excited than he was.”

Along with Ryu’s achievement, Choo Shin-soo of the Texas Rangers also had a big moment in his career on Sunday during a game against the Oakland Athletics at Oakland-Alameda County Coliseum.

Choo, who was assigned as the Rangers’ leadoff batter and a right fielder, got off to a quick start by hitting a leadoff home run at the top of the first inning. Choo hit Athletics’ starter Tanner Roark’s fastball, pitched at a speed of 146 kilometers per hour, over the center fence.

“I hit it far, sometimes,” Choo was quoted as saying. “It surprised me, too. I hit good, but I wasn’t expecting the ball to go that far, especially to center field and the upper deck. I thought it would hit somewhere in that green area. It was a pretty clean swing. I was looking for that pitch. I had my ‘A’ swing.”

Following the home run, Choo added another hit and stole a base. With another great game, Choo now has a 0.266 batting average with 23 home runs and 13 stolen bases for the season.

The Rangers also had a good game, winning 8-3.