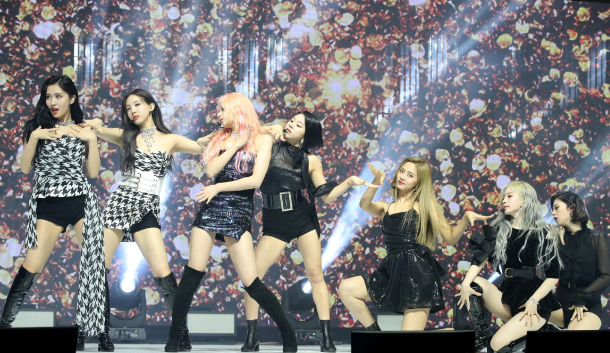 
Being Korea’s top girl group hasn’t been easy for the members of Twice, which is why for their latest EP “Feel Special,” they are taking the time to thank their fans for sticking by them through all these years, the group said on Monday at a showcase held at the Yes24 Live Hall in eastern Seoul.

“The EP is filled with good messages, and we hope that it provides comfort to the listeners’ hearts,” said Twice member Jihyo.

Twice dropped their seven-track EP “Feel Special” on Monday, just five months after their dance hit “Fancy” charmed listeners and climbed the local music charts in April. While Mina took part in the preparation of the EP, she did not attend the showcase on Monday and will not be performing for the time being for medical reasons. Jihyo took part in the showcase but could not pull off the choreography due to a minor injury to her neck that she suffered during rehearsal.

For the title track “Feel Special,” producer and head of JYP Entertainment Park Jin-young and songwriter Lee Woo-min - who goes by the name collapsedone - joined forces once again, after creating two of Twice’s biggest hits in the past together: “Knock Knock” (2017) and “What is Love?” (2018). According to Park, the idea for “Feel Special” came during a conversation the members of the group had with him over dinner, during which the members talked about how they felt looking back at their four-year career.

“I thought a lot about the hardships in the past,” said Nayeon. “But with that, I also felt that there were so many people who loved me and supported me. I even teared up while I was looking at our performances. I hope that the songs give people the chance to think about the people that help them get through difficult times in their lives.”

The members of Twice also took part in writing the lyrics for some of the EP’s songs. Jihyo worked on “Get Loud,” Dahyun wrote “Trick It,” Nayeon penned “Rainbow” and Momo wrote the song “Love Foolish.” The members wrote the lyrics for “21:29” together, a song they dedicate to their fans.

“We all took part in writing the lyrics for the song. We never really have the chance to write back to the letters that we get or express how grateful we are. So I hope this song is an opportunity for the fans to feel how we feel,” said Jihyo.

While “Feel Special” once again delivers lively energy through powerful beats and choreography, the melody is quite emotional and far from the bright and bubbly energy they’ve consistently shown since their debut. It’s a new side of the group, but it won’t be the last, the group says.

“In the past, we wanted to show off more of our cute and bright side, [but] we wanted to express our sincerity with this song,” said Chaeyoung.

Nayeon added, “We want to show fans how we grow with each new song. And with this one, we especially want to be able to communicate with the fans. We hope that we change and grow and be a group that [has a career that extends] long into the future.”

Following the release of their new single, Twice will meet with their dedicated fan club Once at the Hwajeong Stadium located on the campus of Korea University, northern Seoul, on Oct. 20, to celebrate the fourth anniversary of their debut. Twice will also release their second Japanese full-length album “&Twice” on Nov. 20. The album’s lead track is titled “Fake & True.” The group’s YouTube Original series is also in production and will come out in 2020.