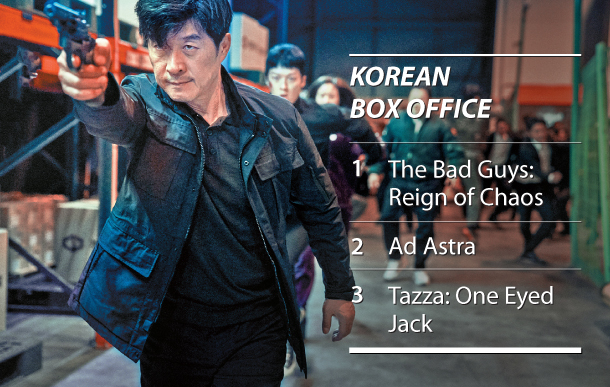 “The Bad Guys: Reign of Chaos” held on to the top spot over the weekend, but many moviegoers refrained from going to theaters due to a lack of new films and Typhoon Tapah. [CJ ENTERTAINMENT]

While “The Bad Guys: Reign of Chaos” held on to the number one spot for the second weekend in a row, the overall box office saw meager ticket sales after last week’s successful holiday weekend.

The local action comedy attracted 661,000 moviegoers to 1,225 screens over the weekend and has managed to sell nearly four million tickets in just 12 days. The film was released one day before the Chuseok holiday and sold more than three million tickets in a week. Seats were filled with fans of the 2018 OCN drama series “Bad Guys,” from which the film is adapted, in addition to fans of actor Ma Dong-seok, who plays the movie’s lead.

Sci-fi thriller “Ad Astra” starring Brad Pitt took the second spot during its debut weekend but did not come close to the No. 1 spot. The Hollywood film sold 303,000 tickets at 853 screens.

The film revolves around a complex father-son relationship set in space. Major Roy McBride, the son of legendary astronaut H. Clifford McBride, is given an important mission to attempt to communicate with the “Lima Project” base with the solar system being struck by mysterious power surges. U.S. Space Command (SpaceCom) presumes that the origin is from the Lima Project, which has been set up in the farthest region of the solar system to search for intelligent life. However, the project became dormant after the crew was suddenly cut off from all communication after they reached Neptune 16 years ago. The project was led by Clifford and SpaceCom thinks that he may still be alive. It is up to Roy to reach his father and stop the surges that may destroy humanity.

“Tazza: One Eyed Jack” slipped down a rank after 199,000 people saw the film at 821 screens. Although the film is the third installment of the famous “Tazza” series, audiences seemed to be disappointed by its plot that actor Ryoo Seung-bum’s superb portrayal of Aekku the one-eyed gambler, couldn’t save.

“Yesterday” debuted in fourth place, with 147,000 moviegoers watching the film at 729 screens. The movie tells the story of a struggling musician named Jack who suddenly becomes famous after a mysterious blackout erases The Beatles from people’s memories, except for his. When he starts singing the famous band’s hit songs, he instantly becomes a star, but he remains uncertain about his ill-gotten fame.

“Cheer Up, Mr. Lee” dropped to fifth place from its third place spot last week, only managing to sell 111,000 tickets through showings at 619 screens.