Former justice is ready to assist

Former justice is ready to assist 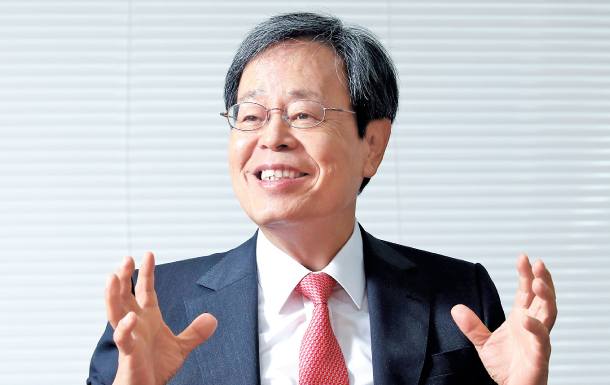 Mok Young-joon, who served as a justice on the Constitutional Court from 2006 to 2012, now aims at fostering young “legal minds” in Korea as chairman of Kim & Chang’s pro bono committee, teaching them how the law can serve their interests. [PARK SANG-MOON]

After serving six years as a Constitutional Court justice at the peak of his judicial career, Mok Young-joon was left with a daunting question he’d never asked himself before: What next?

Luckily, not long after he exited public service in 2012, the Korean law firm Kim & Chang reached out and offered him the chief position in its pro bono group.

Mok realized it was his new calling - helping the socially underprivileged and enabling them to muster their inner courage to take on new challenges in life.

Now, as chairman of Kim & Chang’s Committee for Social Contribution, one new goal he recently set his eyes upon is the fostering of a “legal mind” within Korea’s youth by conveying practical knowledge on law to local middle and high school students.

This, he hopes, will allow them to better understand that the law exists to assist and guide them in their everyday lives.

“When Korea’s population of 51 million all adopts such a legal mind, more people will naturally obey the law and respect the legal boundaries of the country, leading to a harmonious society.”

Less than a week before the International Bar Association’s annual conference kicked off in Seoul on Sunday, the Korea JoongAng Daily sat down with Mok at his office to discuss his work at Kim & Chang and how he wishes to make an impact on the country, which is facing serious divisions on multiple fronts.

The following are excerpts of the interview, which have been edited for clarity.

Q. What are some programs run by Kim & Chang’s Committee for Social Contribution?

A. Our programs largely run on one of two tracks. One track is social volunteer work, like escorting physically challenged elders to various tourist attractions in Seoul and sponsoring cultural programs for disabled teenagers. The other track is offering free legal advice.

The second track is divided into four parts. One is offering legal advice to various nongovernmental organizations serving a public interest. Another is helping disadvantaged members of our society amend the law or establish new laws to meet their needs. The third part is offering general, practical legal education to the socially disadvantaged, like foreign wives married to Korean husbands or small business owners. And the last part is public interest litigation.

What is an example of public interest litigation your committee has handled?

We provided legal assistance to two Korean badminton stars, including Olympic gold medalist Lee Yong-dae, who were handed one-year suspensions by the Badminton World Federation in 2014 for missing doping tests. We filed an appeal to the Court of Arbitration for Sports and proved that the Korean badminton body was to blame for the mistakes, and their suspensions were eventually lifted. We worked so hard on the case, compiling an English report of nearly a thousand pages to explain why they shouldn’t be disciplined and citing similar rulings from all over the world. When their suspensions were lifted, I was so happy I felt like I had won the lottery.

Do you have any new pro bono programs in mind?

Since late last year, we’ve been visiting local middle and high schools to offer legal education to foster what we call a legal mind within the youth. We try to make the lessons really interesting by drawing out various imaginary scenarios and making the students choose their stance by picking cards that explain what they would say if they were in the actual situation and which statements have the higher possibility of winning in the courtroom. We’re currently creating an online video introducing our lessons and planning to upload it on the internet for other school teachers to see. If they watch the video and feel they want to join the program, they can ask for a learning kit containing our teaching materials, all for free. We’ve personally visited about 10 schools in the vicinity so far and are planning to visit more in the years to come.

Why’s it so important to have a legal mind?

Once you have a legal mind, abiding by the law becomes really natural. I think that’s one of the biggest differences between citizens of a developed country and a developing country. We try to tell young students that abiding by the law isn’t something cumbersome - that the law exists to help us defend ourselves, not restrain our opportunities.

What’s your goal as chairman of Kim & Chang’s Committee for Social Contribution?

I think Korea is growing more divided, between genders, ideologies, generations and income levels. Everyone agrees that the gaps should be narrowed, but I think there’s a limit to how far the government can bridge them. That’s where social contribution work comes in. I think it’s really important to enlighten our society about the significance of giving back to others.