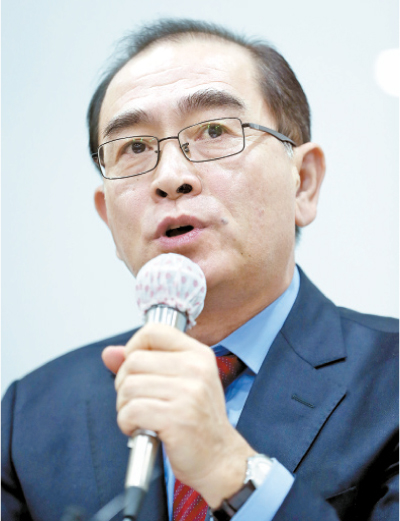 Former North Korean Deputy Ambassador to Britain Thae Yong-ho, who defected to South Korea in 2016, said Monday during a session at the International Bar Association (IBA) annual conference in Coex in Gangnam District, southern Seoul, that when North Korean millennials are old enough to take high-ranking roles in the regime, they will “take to the streets” and protest against Kim Jong-un.

Asked by IBA Executive Director Mark Ellis, the session’s moderator, whether he thinks the regime will ever end or “implode,” Thae said it will take “10 to 20 years” for the North to collapse, adding he has “great hope” that North Korean millennials will bring about that change.

“Once they are in power of North Korea, I think they will do something to change North Korean society,” said Thae, who currently heads Let’s Go Together, a Seoul-based think tank aimed at reunifying the two Koreas.

Thae said North Korean leader Kim Jong-un is the only person in the North’s top echelons who is in his 30s and belongs to the third revolutionary generation, after his grandfather Kim Il Sung’s and father Kim Jong-il’s generations.

“When the third generation comes to power,” Thae said in English to a crowd of international lawyers, “they will take the streets like what’s going on in Hong Kong.”

And when that time comes, Thae turned down the possibility that North Korea’s police will crack down on the protesters because police officers will also resent the North Korean leadership as part of the third generation and long for societal change.

“If students stand up or take the streets [now], I think people in power who are in the second generation will kill them mercilessly. But when the third generations are in power of the security and police, I don’t think they will act mercilessly,” he said.

Thae said he believes the third generation will try to challenge the Kim dynasty because - unlike their parents and grandparents - they have no experience of the 1950-53 Korean War or the postwar period, when North Korea was economically better off than the South. This makes it easier for them to disbelieve the rosy side of the North Korean system that they are taught in school.

“When I was a university student, I studied very hard to get good marks. But students in North Korea now, they don’t work very hard because they can bribe professors. That’s the basic difference between the second and third generation. You can do anything if you have money.”

On the denuclearization dialogue between Washington and Pyongyang, Thae said U.S. President Donald Trump is “playing a dangerous game” with Kim and that even after a year and a half of talks with the regime, Trump has yet to lay out a clear roadmap of how his country is going to realize denuclearization. If Trump agrees to ease some economic sanctions against Pyongyang in return for North Korea’s dismantlement of its “obsolete” Yongbyon nuclear facilities, that could be regarded as the first step toward acknowledging the North as a nuclear power in Northeast Asia, Thae said.

The former North Korean diplomat said current sanctions weren’t strong enough to force Kim to make any concessions on his nuclear development program and that more sanctions were needed.

“Now is the time for the United States and UN to gather to add more sanctions [on North Korea] to reach denuclearization,” said Thae. “So far, the U.S. government is refusing to take more additional sanctions.”

Speaking from personal experience, Thae said the level of difficulty North Korean defectors face when they try to blend into South Korean society seems to depend on their age, saying that young defectors tend to have an easier time getting used to their new home compared to older people like himself, who struggle in tech-savvy South Korea.

“I’m 57, and I feel a lot of difficulties settling down in South Korea because it’s a very advanced digital society,” he said. “If you want to make a bank transaction, you have to use your [smartphone] and memorize the password every time.”

Thae ignited a media firestorm in the summer of 2016 when the JoongAng Ilbo exclusively reported that a diplomat in the North Korean Embassy in London had vanished with his family to seek asylum in another country. Shortly afterward, the South Korean government confirmed it was Thae.

Thae has since shared his insights on the North at forums and in interviews with the media in South Korea and abroad, based on his track record serving for decades in the North Korean Foreign Ministry.