Typhoon took a toll in the south

Typhoon took a toll in the south 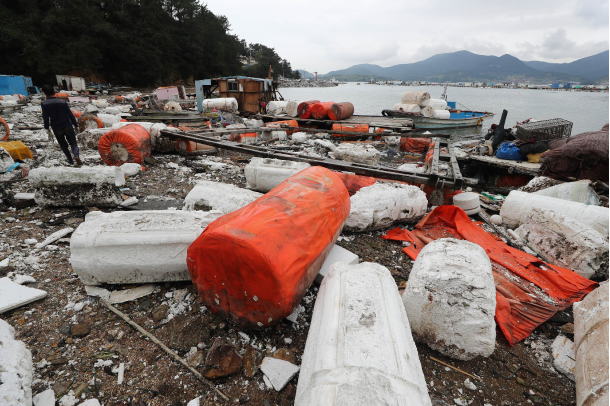 A fisherman examines the state of his fish farm in Yeosu, South Jeolla, on Monday after Typhoon Tapah passed over the city over the weekend. A total of 25 fishermen out of 45 in the area reported damage from the typhoon. [YONHAP]

Typhoon Tapah dissipated in the East Sea on Monday, but not before injuring 26 people in Korea and displacing 19 people from their homes, inundating 60 roads and some 500 hectares (1,236 acres) of farmlands over the weekend.

A total of 26 people were injured in the typhoon, with one of them sustaining a serious injury, said the Central Disaster and Safety Countermeasures Headquarters, an agency operated by the Ministry of the Interior and Safety, on Monday morning.

Most of the injuries occurred in the southern coastal regions, which were hit the hardest as the typhoon reached the Korea Strait over the weekend.

A total of 19 people were displaced from their homes in Sacheon, South Gyeongsang, of whom 13 were able to return as of Monday morning, the agency said. The homes of the other six were reported to be in need of repair. The six are staying at a temporary shelter set up at a local community center in the city. There were three deaths recorded in the wake of the typhoon, although the agency did not include them in the official casualty records of the typhoon, stating that the deaths resulted from safety hazards, pre-existing conditions or reasons not directly related to the typhoon.

A dilapidated house in Busan collapsed around 10:25 p.m. Saturday, trapping a 72-year-old woman inside. Authorities reached her 8 hours later, but she was already dead. According to police, the dilapidated building was over 40 years old and vulnerable to rain and wind.

A bus skidded in the rain on Gyeongbu Expressway near Daegu and veered off the road, tumbling down a small hill, around 3:55 p.m. on Sunday. The accident killed one passenger and injured 18 others.

A 66-year-old captain of a ship in Ulsan was on board a maritime police officer’s boat in the sea near Onsan Port around 1:15 p.m. Sunday, on his way to rescue his vessel, which was reported to be adrift in the sea, when he suddenly lost consciousness in the boat, according to authorities.

The maritime police said they tried to resuscitate the captain but were unsuccessful. The captain was transported to a hospital in the vicinity but was pronounced dead.

Around 400 flights to and from Jeju Airport, 190 others at Gimhae Airport and a few dozen flights at Incheon International Airport, and Daegu, Gwangju and North Chungcheong’s Cheongju airports were canceled on Sunday. All flights returned to normal as of 5 a.m. Monday. Sea routes were still being controlled as of Monday morning, with 28 routes remaining off limits while some 60 other routes were back in operation.

The Central Disaster and Safety Countermeasures Headquarters said 60 roads were inundated - 12 in Jeju and 48 in Ulsan. The roads in Jeju were restored as of Monday morning, while authorities were still working on roads in Ulsan, the agency said. A total of 496 hectares of farmland in South Jeolla were inundated, the agency said.

Tapah formed in the northwestern Pacific Ocean on Thursday and passed the southern coast of Korea over the weekend, bringing torrential rainfall to Jeju, Ulsan and Pohang. From Saturday to Sunday morning, it rained 783 millimeters (30.8 inches) in Jeju, 345.5 millimeters in Ulsan and 306.5 millimeters in Pohang, according to the Korea Meteorological Administration.