As the NC Dinos inch closer to finalizing a spot in the postseason, it’s fair to say that their big investment in catcher Yang Eui-ji at the end of last season has paid off. 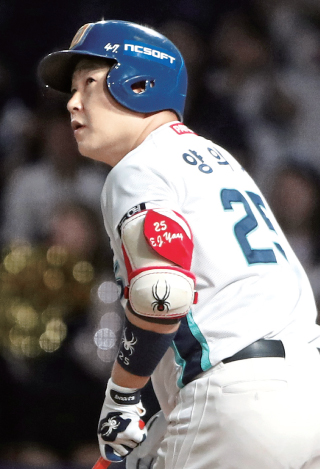 Yang Eui-ji of the NC Dinos rounds the bases after hitting a two-run home run during a game against the LG Twins at Changwon NC Park in Changwon on Sept. 19. [YONHAP]

After the Doosan Bears finished runner-up in the Korean Series last year, Yang signed a big free agent (FA) contract with the Dinos, signing a four-year contract at 12.5 billion won ($10.5 million). At the time, the Dinos were missing their starting catcher Kim Tae-gun as he fulfilled his mandatory military service and had just finished dead last in the 2018 season, the worst year in the club’s history.

Since Yang’s contract was the second-highest free agent contract ever and the highest of any catcher in the KBO, the Dinos had high expectations for the 2019 season.

At the same time, the Dinos were also criticized by some fans for overpaying for Yang. The 2019 season has definitely silenced the critics.

As of Monday’s game, the Dinos are ranked fifth - the last postseason spot - in the regular season standing at 72 wins, 65 losses and a draw. Although just a short while ago they were locked in a race for fifth with the KT Wiz, the Dinos have now pulled ahead and have a big 4.5 game lead on the Wiz.

Yang may now be one of the most dominant players in the KBO, but it hasn’t all been smooth sailing. In June 2017, Yang was caught by a stray pitch, injuring his finger and taking him out for a month.

His return to the team wasn’t easy, and he struggled to find his old rhythm. He ended the 2017 season with a batting average of 0.277, his lowest since 2013.

But in 2018, his last season before becoming a free agent, he finished with a 0.358 batting average with 23 home runs and 77 RBIs in 133 games. And he’s continuing his success once more this year with his new club.

After 113 games, Yang has a 0.362 batting average with 20 home runs and 66 RBIs this season. Yang’s batting average is good enough to top the league. Jose Fernandez of the Bears is ranked second in batting average at 0.342, followed by Lee Jung-hoo of the Kiwoom Heroes at 0.339.

By becoming the leader in batting average, Yang has a big achievement ahead of him. If he wins the batting title, he will become the first catcher in 35 years in the KBO to do so.

Before Yang, Lee Man-soo, formerly of the Samsung Lions, is the only catcher to have won the batting title during the 1984 season, when the league was just two years old, with 0.340.

Yang’s home runs are also impressive as the number of homers has decreased significantly across the league this year because of the KBO’s new baseball.

Yang isn’t only excelling at bat.

At the beginning of the season, the Dinos were missing quite a number of starting pitchers due to injury, but Yang successfully led the young pitchers from behind the plate to ensure the Dinos stayed in the top half of the table.

Yang’s performance stood out this month when the Dinos had a two-game series against the Wiz.

At the time, the two teams were only one game apart, but the Dinos swept the Wiz to extend their lead at fifth.

At the beginning of the season, Yang not only led the young pitchers, but he also had to fulfill his role as the Dinos’ cleanup hitter as they also missed some starting fielders due to injuries. Due to this, there were concerns that Yang would get tired, since catcher tends to be more tiring than other positions.

As expected, Yang had to take some time off in July. He missed a month due to a side injury.

But this year, a break was just what he needed. Since his return on Aug. 13, Yang finished the month of August with a 0.400 batting average, and this month, he still has an impressive 0.347 batting average.

Thanks to that consistency, Yang also leads the league in on-base percentage, at 0.443, and in slugging percentage, at 0.590. Of the fielders, Yang stands out the most this season, as he is the only player to be ranked first in multiple categories.