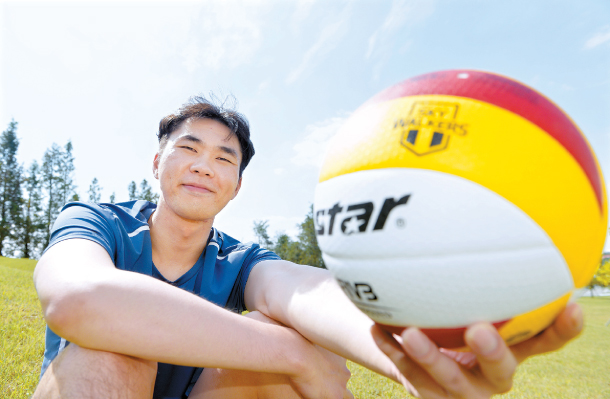 Jeon Kwang-in of the Cheonan Hyundai Capital Skywalkers is ready to lead his club to defend the Korea Volleyball Federation (KOVO) Championship title.

Six months ago, when the Skywalkers were competing for the championship title against the Incheon Korean Air Jumbos, Jeon was in so much pain from a knee injury that he had to take painkillers during the game and had to get injections before he took to the court. Despite that pain, Jeon still competed in all the championship matches and helped the Skywalkers win the title by defeating the Jumbos in the first three games of the series.

By scoring 55 points throughout three championship games, Jeon was named MVP. Although he was recognized as the best player, that accolade came at a price. Jeon’s knee was in such bad condition that he had to undergo surgery.

Once the championship ended, Jeon underwent knee surgery in April. This was the first time ever that he had to have surgery since he began playing volleyball when he was nine years old. He first started feeling pain in his knee in 2015, while playing for the Suwon Kepco Vixtorm.

“If my pain level was at 10 before, now it’s at three,” Jeon said. “It’s not like I don’t have any pain, but compared to that time, I can live with it. At first, it was a slight rupture, but it got worse as I kept on using my knee. I survived through it by working out until my left thigh was thicker than my right.”

Having continuously played through the pain, Jeon finally chose to undergo surgery after he was named the championship MVP. Until then, Jeon kept on postponing his surgery as he’d seen a lot of players failing to continue their performance after taking too long of an absence.

“I thought about it until the very end because I was afraid,” Jeon said. “But I’ve made my decision after head coach Choi Tae-woong suggested I need to get surgery.”

When Jeon became a free agent last year, he signed a three-year contract with the Skywalkers, with an annual income of 520 million won ($435,000). With the signing, he became the second-highest paid player in the men’s league.

Considering Jeon’s high income, his surgery wasn’t an easy decision for the club and head coach as it could have taken him out of the game for the entire season.

“Our head coach has seen a successful return after a surgery from players like Moon Sung-min and Shin Young-suk,” Jeon said. “He believed that if I followed the club’s rehabilitation program, I would be able to play like I did before.”

Following Choi’s plan, Jeon started training just four days after the surgery. Rehabilitation was tough - the surgery had left him with significantly less muscle on his left leg and pain every time he bent his knee.

“Over the last four months, I’ve been working on my rehabilitation for seven hours a day, six days a week,” Jeon said. “Starting from walking in water to basic weight training, I finally got to run on a treadmill. It was so painful that I got annoyed by the trainers sometimes. I felt really bad.”

Jeon gained about six kilograms (13 pounds) of muscle, with his weight going up from 88 kilograms to 94 kilograms. During this time, Jeon found the motivation to work harder when the Skywalkers’ foreign player Yosvany Hernandez joined the rehabilitation crew with a shoulder injury.

“It felt like my entire body was burning,” Jeon said. “It was so painful that I screamed. When I saw Yosvany working hard in rehab, I started to work harder.”

Finally, Jeon started volleyball training where he got to jump and toss the ball at the beginning of this month.

“It’s like I’m playing volleyball for the first time,” Jeon said. “That’s how difficult it is. It’s hard to receive my teammate’s pass, and my jumps are low. I’ve got a little embarrassed because even when I think that I’ve jumped my highest, I haven’t. It feels like I’m starting from zero.”

While Jeon is frustrated about his progress after surgery, Choi isn’t rushing the process, as he also knows what it’s like, having suffered from injuries a lot back when he was a player.

“When doctors say it’ll take five months of rehabilitation, that doesn’t mean that you’ll be in top condition to compete within five months,” Choi said. “Five months means the time it’ll take for you to be pain-free in your normal life. You start getting back in shape after that. I’m going to make him play little bit from the KOVO Cup and have him slowly bring up his condition. In the regular season, he’ll be able to play like he used to.”