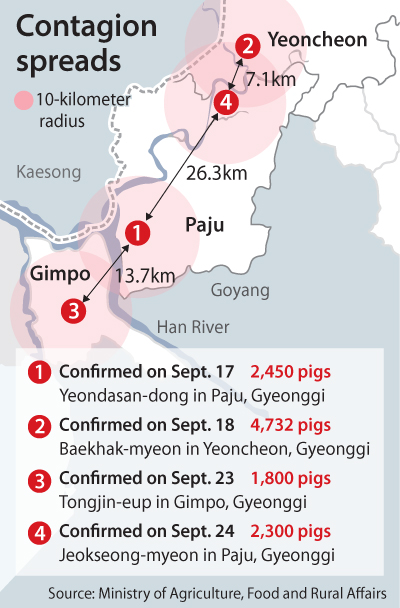 The government confirmed the fourth case of African swine fever (ASF) in South Korea just a week after the outbreak was originally reported, heightening fears that the disease is spreading despite containment measures.

The Ministry of Agriculture, Food and Rural Affairs said Tuesday that it confirmed a further case of the virus at a farm in Paju, Gyeonggi, 26.3 kilometers (16.3 miles) away from the outbreak site in the same region and around 7 kilometers away from the site of the second confirmed case in Yeoncheon County.

The latest Paju farm, which has 2,300 pigs, had reported three female pigs with miscarriages, a symptom of ASF, on Monday.

The announcement follows confirmation of the disease at a pig farm in Gimpo, Gyeonggi, just a day earlier.

The ministry also said it received reports of another possible case at a farm in Ganghwa County in Incheon on Tuesday. Authorities have taken emergency disinfection and quarantine measures at the farm, which has 400 pigs. The case was not confirmed as of press time.

The latest cases highlight that containment efforts such as a 48-hour lockdown from last Tuesday and nationwide disinfection may have been ineffective as the virus appears to have spread during the incubation period of 19 days.

The government said that feed and slaughterhouse vehicles had travelled between the outbreak site and the three other farms in the past three weeks, although it could not confirm whether the vehicles caused the spread of the virus.

An Agriculture Ministry official explained that it is too early to draw conclusions and that an investigation is currently underway on the cause of the spread of the virus.

Other potential causes for the disease include direct contact with infected wild boar or pigs from North Korea, which had an outbreak in May, and tainted feed.

The outbreak site in Paju is less than 10 kilometers away from the border.

The Gimpo case confirmed on Monday also marks the first time the disease has been reported south of the Han River, which some experts had hoped would act as a natural barrier, containing the disease. The farm first tested negative for the virus in preliminary inspections after the outbreak last week. The Agriculture Ministry explained that tests could show negative results during the early stages of the virus’ incubation period.

The government is culling all 5,475 pigs at the farms in Paju and Gimpo and at farms within a 3-kilometer radius. The total number of pigs culled in the past week is expected to rise to over 20,000.

The government scrambled to contain the disease on Tuesday, ordering a new 48-hour lockdown on pig farms nationwide, as well as disinfection.

“Considering the grave situation, we will consider extending the standstill order based on the future situation by region,” said Agriculture Minister Kim Hyeon-soo during a briefing at the Government Complex in Sejong.

The government also reorganized its special management regions to contain the disease into four locations to include all of Gyeonggi and Gangwon. It had previously designated six counties and cities within the provinces.

ASF has a fatality rate of 80 to 100 percent for pigs, although it is harmless to humans.