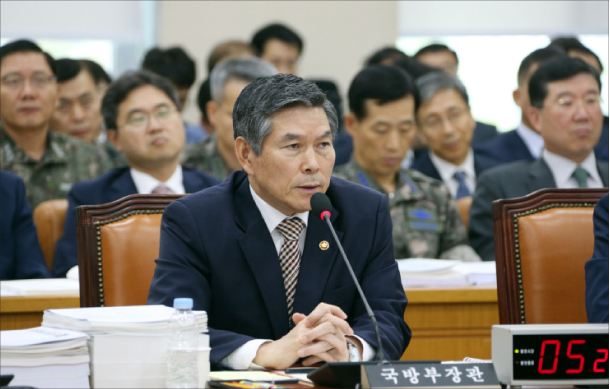 LEE CHUL-JAE
The author is a deputy international news editor at the JoongAng Ilbo.

Lately, there is a banned term in the Ministry of National Defense and the Joint Chiefs of Staff. It is “disarmament.” Defense Minister Jeong Kyeong-doo’s face changes whenever he hears the word. After a retired general recently told him that there are rumors of the military being disarmed, Jeong immediately responded by saying he felt disappointed.

Minister Jeong seems to think that even though military readiness remains the same after the Sept. 19 agreement, some people with political intention want to exaggerate security anxiety. For the past year, North Korea has been quiet along the MDL and NLL. The joint drills with U.S. forces have been scaled down but are in progress. Weapons are thoroughly and quietly being augmented as planned. Though Jeong refrained from using rhetoric such as “Action first, reporting later” on the frontline or “striking the origin of provocation,” he seems to personally view that there has been substantial improvement in our security.

But the internal situation is different. In May, part of a wire fence along the Defense Security Support Command was cut, but the suspect has yet to be caught. In June, after a small wooden boat from North Korea entered Gangwon Province without being detected, military authorities kept quiet. In July, a naval officer of the Second Fleet was exposed for attempting to cover up a military base break-in case with a false confession.

Each one is a painful incident demonstrating our slack military discipline. A military source told me that military commanders’ unwillingness to respond aggressively is a bigger problem. Rather than getting mad at the mention of disarmament, it is time for Minister Jeong to fix his helmet first.