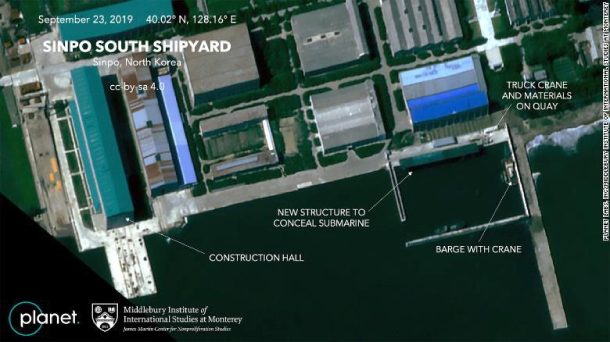 North Korea may be gearing up to deploy a new submarine possibly equipped with ballistic missiles, according to satellite footage obtained by a U.S. think tank.

The commercial images, taken by the Middlebury Institute of International Studies and Planet Labs, show a large structure under construction at a naval shipyard in Sinpo, South Hamgyong Province, that looks designed to conceal a new submarine.

It could be the 3,000-ton submarine that North Korean leader Kim Jong-un inspected on July 23 while on a visit to Sinpo. State media at the time called the weapon “an important component in national defense” and said that its operational deployment was “near at hand.”

Quoting Jeffrey Lewis, director of the Middlebury Institute’s East Asia Nonproliferation Program, CNN reported on the satellite images Tuesday, saying the structure suggested the submarine could be ready for launch soon or had already been launched.

A military official in South Korea also said Sunday that Seoul has spotted signs that North Korea is building a large underground facility on Mayang Island, just off the coast of Sinpo, which is home to the country’s largest submarine base.

Evidence of a new vessel that could outclass any other operational type in North Korea’s large fleet of submarines has been discussed by experts and the media for months.

Last month, the Washington-based Center for Strategic and International Studies (CSIS) published a report that discussed “circumstantial evidence of the construction of a new ballistic missile submarine,” which it claimed was evidence of the regime inching closer to becoming a “survivable nuclear force” while “lessening prospects for full denuclearization.”

In particular, the report pointed to vessels and a crane that it said could be used to tow the vessel out to sea in preparation for a submarine-launched ballistic missile test, though it said there was not enough evidence to conclude that this would happen soon.

The prominent North Korea analysis website 38 North earlier this month said signs that Pyongyang has been developing a new type of ballistic missile submarine have been recognized for years and that the weapon’s “vulnerability and operational limitations render it a marginal threat to the continental” United States.

According to a South Korean government official in July, the publicity given to the submarine by the North’s state media was highly unusual given that such key military assets are usually kept under wraps.

Among the dozens or so submarines docked at Mayang Island, the North is believed to possess various Romeo- and Whiskey-class submarines, both originally designed in the Soviet Union.

There has been only one observation of the regime’s newest class of subs, known as the Sinpo-class, commissioned for service sometime around 2016.

The new 3,000-ton sub, which could be the vessel dubbed Sinpo-C class by U.S. intelligence based on an October 2017 report, may be transferred to the island, from which the regime could hold a ballistic missile test as it prepares to resume working-level talks with the United States.

As it was with its land-based short-range weapons tests throughout late July to early September, a new submarine-launched missile test could serve to pressure the United States and shore up Pyongyang’s position in the negotiations.