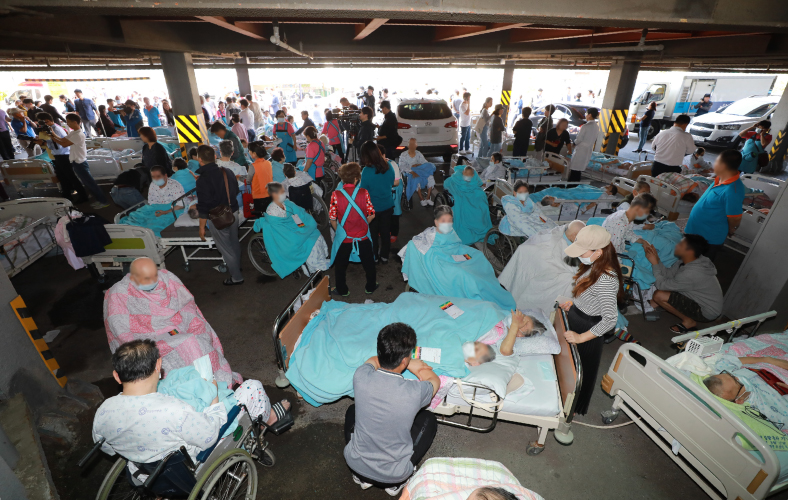 Patients of a hospital that specializes in elderly care in Gimpo, Gyeonggi, wait for medical transportation in a nearby parking lot after a fire broke out in the boiler room of the hospital on Tuesday. [NEWS1]

Two people were killed and 47 were injured after a fire broke out Tuesday morning at a hospital that specializes in caring for elderly patients in Gimpo, Gyeonggi.

According to Gyeonggi Provincial Fire Service, the fire started around 9 a.m. in the boiler room on the fourth floor of the building and was extinguished after about an hour.

The building has five floors above ground and two underground, and the hospital is located on the third and fourth floor. About 130 patients and 30 workers were in the hospital when the fire occurred. Two patients in their 80s and 90s were killed and 47 were injured, eight seriously. The injured people are being treated at nearby hospitals and the eight have been taken to intensive care units (ICU).

The fire department says it’s likely the fire broke out when a valve in the oxygen tank in the boiler room was opened to manually supply oxygen to patients, as the Korea Electrical Safety Corporation had cut off the electricity for an inspection around 9 a.m.

While emergency alarms went off, the sprinkler system did not. The fire department said it will further investigate what caused the fire.

The two patients who died were having oxygen administered to them via masks in the ICU when the fire broke out. The fire department is investigating whether the patients died due to lack of oxygen or smoke inhalation. The ICU is located on the same floor as the boiler room.

The fire did not spread after it burnt the boiler room, but smoke from the blaze was widespread. Most of the patients and workers were able to quickly evacuate, but some patients with restricted mobility had difficulty.

While the fire department classified the fire as level one, the lowest of the three-level firefighting scale, all of the district’s 1,154 rescue workers and fire fighters were dispatched to the scene.

President Moon Jae-in, who is currently in New York to attend the United Nations General Assembly, ordered “all possible” measures be taken to prevent casualties.

The Gimpo Police Precinct said it formed an investigation team, consisting of 19 people, to thoroughly investigate the cause of the fire and will question employees about the safety management of the hospital.