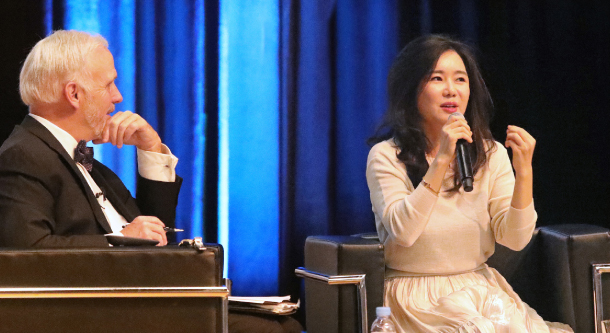 Lee Hyeon-seo, right, a North Korean defector and human rights activist, talks about the dire living conditions of North Koreans to Mark Ellis, left, executive director of the International Bar Association (IBA), in front of an audience of lawyers from around the world during the IBA’s annual conference at Coex in Gangnam District, southern Seoul, on Tuesday. [PARK SANG-MOON]

Lee Hyeon-seo, a North Korean defector and human rights activist who was invited to the White House last year, expressed disappointment in U.S. President Donald Trump on Tuesday for failing to speak out about the dire living conditions of North Koreans and stressed that Washington should crank up sanctions on the regime.

During a session at the International Bar Association’s (IBA) annual conference at Coex in Gangnam District, southern Seoul, Lee told IBA Executive Director Mark Ellis, the moderator, that she was filled with hope last year when Trump publicly raised North Korea’s human rights issue before his first summit with North Korean leader Kim Jong-un in Singapore on June 12, 2018 and that she burst into tears, thinking North Koreans would finally find freedom like she did.

She went on, “I was so happy last year [when] America, including President Trump, as if he cared about human rights issues a lot, he gave public speeches a lot mentioning a lot about North Korean human rights issues. I was crying at the time.”

Lee recalled telling Fox News during an interview that Trump was the “first leader in the world” who publicly mentioned North Korea’s human rights issue, something she had wanted to hear from other leaders throughout the years.

“President Trump, he did that, so I was very impressed,” she said. “But as time goes by, after the Singapore summit and Hanoi summit, no [leader] right now is mentioning [the] North Korean human rights issue.”

Instead, she said, leaders appear to be “legitimizing the regime,” which only paves the way for North Korean people to suffer more.

Lee said she hopes the regime will collapse, though that currently that seems unrealistic.

During Tuesday’s IBA session, Lee also recalled the time she personally met U.S. Vice President Mike Pence in South Korea in February 2018, when he visited the country to attend the opening ceremony of the PyeongChang Winter Olympics held in Gangwon.

Lee said she told Pence privately, after all the media cameras had left the room, that Washington should impose more sanctions on the regime.

“I told him that America should never give up sanctions. ‘You have to put more stronger sanctions on North Korea,’” Lee told Pence.

Thanks to the sanctions Washington imposed on Pyongyang for many years, North Koreans were now “awakening” to the reality of their situation, fleeing the country and raising the North Korean human rights issue to the outer world, she said.

The sanctions also crippled North Korea’s public rice distribution system, enabling North Koreans to learn not to rely on their government and to realize the importance of money and care about their own family, not the leader of the country, Lee added, explaining that’s why she “really strongly supports” added sanctions.

After hearing her speech about the importance of sanctions, Pence was said to have replied, “That’s [such a] brilliant idea. Thank you for saying that.”

Asked by the moderator about the living conditions of North Korean defectors in South Korea and how they were adjusting to local society, Lee, who arrived in the South in 2008 and published her best-selling memoir “The Girl with Seven Names - Escape from North Korea” in 2015, said she was still facing - and trying to overcome - many obstacles.

The defector explained she expected to be warmly embraced by South Koreans from the moment she landed at Incheon International Airport, solely because she was from the North.

“But the reality was the complete opposite,” she said, adding that, throughout the years of division, North Koreans were “completely forgotten” people to the South Korean general public, who consider North Korean defectors a “burden” to their society.

Settling in the South, Lee said she also realized that both Koreas had drastically different cultures and lifestyles and even used different languages.

Those gaps, she said, caused her to have an identity crisis, not knowing whether she was a North or South Korean.

Many North Korean defectors in the South still struggle with their identity today, Lee said.