African swine fever may have spread to 3 more farms

African swine fever may have spread to 3 more farms 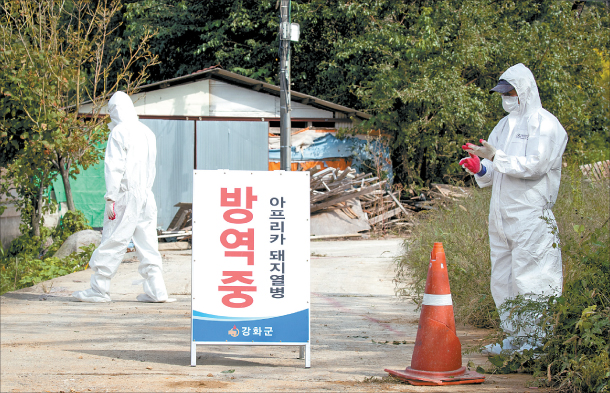 A government employee restricts entry to a pig farm in Ganghwa County in Incheon that is fumigated on Wednesday after African swine fever was confirmed. [NEWS1]

The Ministry of Agriculture, Food and Rural Affairs said it received three new reports of suspected ASF - two in Ganghwa County in Incheon and one in Yeoncheon County in Gyeonggi.

The government conducted emergency disinfections of the three farms, which have around 3,000 pigs in total.

The virus was not confirmed as of press time. If confirmed, that would bring the total number of infected sites to eight.

Confirmation of the fifth case of ASF was made on a farm in Ganghwa County on Tuesday after pigs tested positive during preliminary inspections. The government had implemented a 48-hour lockdown on pig farms nationwide after confirmation of a fourth case earlier that day.

The government is set to cull over 50,000 pigs since the original outbreak last Tuesday.

To contain the spread of the disease, the government has reorganized areas for special management to include all of Gyeonggi and Gangwon Provinces. Previously, it had designated six counties and cities in the provinces. Pigs and their waste in those regions will be restricted from being moved to other areas for three weeks.

As the virus has an incubation period of 19 days, the three-week period is an important threshold.

The containment measures focus on stopping the disease from spreading south. Confirmed cases have so far been limited to areas near the border in northern Gyeonggi, although the disease has crossed south of the Han River, seen as a natural buffer against the contagion’s spread.

The outbreak’s proximity to the border has raised questions about whether the disease came from North Korea, which confirmed an outbreak in May. The Agriculture Ministry explained that it is still conducting an investigation on the outbreak’s cause. ASF spreads through direct contact between infected wild boars or pigs and through contaminated feed.

The containment measures are meant to prevent a repeat of the mass culling that occurred during foot-and-mouth disease outbreaks in 2010 to 2011. Over 3.5 million livestock were culled as a result.

The ASF outbreak has also resulted in wild swings in pork prices.

After confirmation of the ASF outbreak on Sept. 17, the average wholesale price of a kilogram of pork shot up to 5,975 won ($2.26 per pound), rising 31 percent from a day earlier.