Understanding a new generation of K-pop fans: As acts become accessible, the industry is listening to fans now more than ever

Understanding a new generation of K-pop fans: As acts become accessible, the industry is listening to fans now more than ever 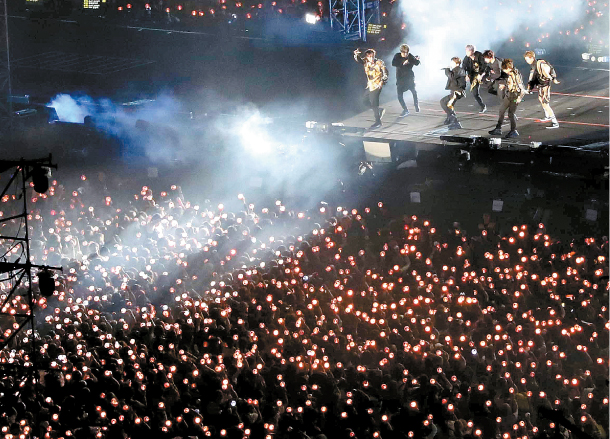 Fans shine their light sticks during a BTS concert held in Busan in June. [YONHAP]

When cable channel Mnet first announced their concept of a show in which 101 trainees from different agencies would compete for a place in a project K-pop band, many were skeptical as to how talented a group formed by fans would actually be. Fans were accustomed to choosing among groups meticulously prepared and presented to them by entertainment agencies who carefully picked each member and trained them for years before they ever stepped foot on stage. The first season of “Produce 101” introduced the world to I.O.I, the first-ever girl group whose members were hand-picked by the public.

K-pop fans have always been active and passionate about expressing their affection, but with the advent of the “Produce” series, they realized that they could do more than just choose - they themselves could be producers. From the birth of I.O.I, to its successors Wanna One, IZ*ONE and X1, K-pop fans have evolved into actual producers that can make their voices heard like never before. Seeing such change, the industry has started creating services and platforms solely dedicated to fandoms - from a research center that analyzes fan behaviors to a fan-to-star community platform where the two parties get to communicate directly.

The concept of fandoms has existed for decades. But not long ago in Korea, K-pop fans were commonly referred to as ppasuni, a word that poked fun at young teenage girls shouting “oppa” to male celebrities, limiting their actions to irrational fanaticism. A K-pop fan was seen as someone madly in love with a celebrity in vain, and a fandom as the union of such misled souls. The word still lives on, but the derogatory nuance has been minimized and fans even call themselves “ppasuni” for fun.

K-pop fandoms began with the debut of Seo Taiji and Boys in 1992, a trio that is often dubbed the first K-pop boy band. They were quickly followed by the first generation of idol groups that debuted in the late 1990s - the likes of boy bands H.O.T and Sechskies and girl groups Fin.K.L and S.E.S. The lineage was continued by the second generation of bands that debuted in the 2000s, including TVXQ, Super Junior, Big Bang, SHINee, Wonder Girls, Girls’ Generation and T-ara.

The first and second generations of fans evolved in tandem with the developing music industry. According to Professor Lee Eung-chel from the anthropology department at Duksung Women’s University, the way these fans differed from fans of earlier singers was that they started expressing themselves as a member of a fandom, using different symbols to show their allegiances.

“There had been fans of earlier singers like Nam Jin, Nahoona or Cho Yong-pil, but you couldn’t tell they were fans if they didn’t say so,” said Lee. “But K-pop fandoms used items to express their identity such as glow sticks or by wearing similar clothes and buying certain brands. You could tell that they were fans just by looking [at them] and that’s how they showed that they were [part of a] community.”

The second generation signified a major turning point in which society started recognizing the fandoms. While the word “ppasuni” was used to belittle fans - who were mostly teenage girls - and their actions as being unproductive, the first generation of teenage girls eventually grew up to be women in their 20s and 30s, and even foreign and male fans started to join the party. With a more diverse pool of fans who actually used money they earned, the stereotype of a “ppasuni” no longer worked.

Cultural studies professor Lee Gyu-tag from Mason Korea explained that studying K-pop fandoms gives insight into “how the industry will change,” and how companies can “better establish their business tactics based on that knowledge.”

“The K-pop industry is a unique one in that it’s shaped by the fans’ behavioral patterns, and not the general public. Understanding the fan culture is essential in understanding how the industry functions as a whole.”

Despite the unclear demarcation of what qualifies a K-pop act as being part of the third generation, there was one particular event that birthed a new generation of fandoms: the Mnet competition series “Produce 101.”

According to Shin Yoon-hee, the author of “Fandom 3.0,” a comprehensive look into the evolution of fandoms in Korea, the third generation of fans came from referring to the show’s audience as “Public producers,” and having the contestants sing “Pick me” to the viewers of the show. For the first time, fans got to choose who they want to have in their dream group themselves.

“Fans always wanted to have a say in what the stars do, what they wear and so on,” said Shin. “But for the first time, they had that choice. Not only did they ultimately get to form an entire band through their votes, they got to decide on their hairstyle, what song to sing and even the name of the band in the process. Fans were always active, but they had never really taken part as much as they did with I.O.I, Wanna One, IZ*ONE and X1.”

The third generation fandom also differs in that many are only fans of a particular member of a group. According to Shin, it was a taboo for first generation fans to like only certain members of a group and different fandoms saw each other as competition, not colleagues. The second generation fans were allowed to have favorites within the groups, but were still required to like the group as a whole.

During the “Produce” series, however, viewers had to choose one single member. Wannable, the official fan club for Wanna One, turned out not to be a group of fans of Wanna One, but an assembly of the 11 fandoms of each of the members of Wanna One.

“Having particular favorites actually shows how society has changed from a collective one, in which all the members of a fandom have to share the same taste, to a more liberated and individual one, in which people are allowed to express their personal taste. Right now, we live in a world where fans get to communicate directly to their stars. And even though Wanna One has now disbanded, Wannable is still trying to keep the name alive. This is something that never happened before,” said Shin.

As always, the industry has been quick to adapt to the new generation of fans in various ways. Numerous apps and services have been launched since the beginning of this year, all with a similar goal - to meet the new generation’s needs. While some are focused on analyzing fan behavior, some services understand that fans want contents that are not just music, but more intimate and personal.

Online message boards and websites have long provided fans with music, pictures, videos and even personal letters from group members. But Big Hit Entertainment’s Weverse, an app that launched in June, takes that relationship a step further, providing not only exclusive content for fans, but also a live chat function that allows fans to talk to the members of BTS or Tomorrow X Together directly. Members of the band write daily journals for fans to read, and the community develops a sense of intimacy with the group.

“Having one single app, instead of various platforms spread out across the internet, is really convenient. And the idea of being able to communicate easily with the group members is the best part,” reads one review of the app on Google Play.

Blip, on the other hand, is “the first ever fandom research center,” according to Space Oddity, the music company that launched the service in August. Made up of music experts, columnists, data scientists, content creators and IT experts, the service is dedicated to analyzing the consumption and behavioral patterns of K-pop fandoms.

“We saw the importance of fandoms as the cause of the immense growth of the K-pop industry,” said Space Oddity. “We understand that fandoms have become a form of cultural consumption and the difference in the way people perceive the K-pop industry. And as K-pop gets even more attention from around the world, we will be focusing on the changes and developments within the K-pop community.”

The first project by Blip, K-pop Radar, was also launched in August. The website provides an easy way to glimpse at the number of followers popular K-pop acts have on Twitter, Facebook or Instagram; the number of YouTube views of each group’s music videos; and the number of members each group’s official fan cafes have. The numbers are automatically updated.

K-pop Radar uses the data they accumulate and releases briefs about their insights. On Aug. 21, they released the “2019 Global K-pop Map,” which showed the map of the world highlighting the popularity of different K-pop acts in different regions. The brief included graphs of which countries watched K-pop music videos the most and a list of the five most-watched K-pop acts in each continent.

Other services include Artist & FLO, launched by SK Telecom in July, through which fans can subscribe to K-pop band member’s individual channels. Naver Fanship, SSUM, Star Play, Whosfan and SnowDAQ are all similar services aimed at catering to fans’ needs.

“Understanding K-pop fans and their behavior ultimately leads to understanding the K-pop industry and allows people to speculate the future,” said Professor Lee.