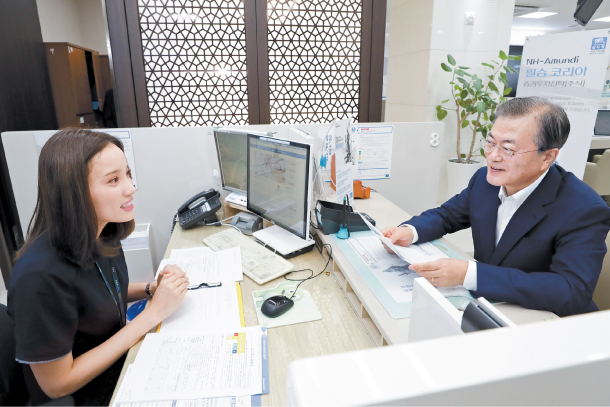 In front of a banner featuring the imposing statue of Admiral Yi Sun-sin, a Korean hero famed for his successive naval victories against Japan during the Joseon Dynasty (1392-1910), President Moon Jae-in signed up for an investment fund in a rare, highly publicized visit to a bank last month.

Since that signing event, hardly a day has gone by without a politician posing for a photo as they register for the so-called Moon Jae-in fund, a public display of support as the government pulls out all the stops to counter the impact of Japan’s export restrictions on key materials used in chips and smartphones.

Dubbed the Victorious Korea Equity Fund, the product weaves patriotism into its portfolio by funneling a sizable portion of investment into local parts, materials and equipment makers. The equity investment, structured by NH-Amundi Asset Management, emerged as one of the most popular fund products this year, attracting more than 60 billion won ($50 million) within one month of its release.

A spokesperson at NH-Amundi Asset Management said that the fund raised the highest amount of investment this year among stock funds.

Of the 64 billion won raised, 50 million won comes from Moon’s own pocket. High-ranking officials including Finance Minister Hong Nam-ki, Minister of SMEs and Startups Park Young-sun and Minister of Science and ICT Choi Ki-young have all followed in the footsteps of their boss.

Leaders from regional governments were also in a rush to mobilize support, as South Jeolla Governor Kim Yung-rok, Busan Mayor Oh Keo-don and Cheonan Mayor Ku Bon-yeong have subscribed to the fund devoted to Korean companies seen as vital to ease reliance on Japan.

As the patriotic fervor grew, a group of employees from NongHyup Bank and Kwangju Bank who were responsible for selling the fund even signed themselves up as well. 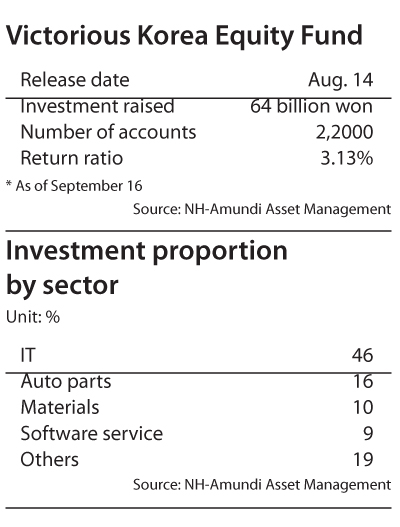 Boosted by the high-profile promotion, a total of 22,000 accounts have been opened to invest in the Victorious Korea Equity Fund as of Sept. 16, according to the asset manager. The return rate stands at 3.13 percent.

“It’s been only a month after the release, and we think we have gotten off to a good start,” a spokesperson at NH-Amundi Asset Management said.

The asset manager’s strategy to push patriotism appeared to have worked, as some investors are willing to put country ahead of cash flow.

“We’ve heard that some subscribers identify with the need to be independent of Japanese exports and put trust in the fund because the president signed up for it,” the spokesperson said, adding that investors are often Moon supporters.

However, some industry watchers raised skepticism against the highly-publicized fund due to the murky combination of politics and finance and smaller-than-expected portion of stocks from component and materials companies.

Despite the emphasis on the specific sector, most of the investment, 46 percent, is channeled into tech companies including Samsung Electronics and SK Hynix. The stocks of parts, materials and equipment manufacturers account for around 30 percent, according to the asset manager.

“Taking a quick look at the name of the fund, the investors will be misled to assume that the majority of the investment will go toward the specific industry relevant to Japanese restrictions,” said a source in the investment banking sector.

NH-Amundi, however, defended its fund, saying that the portion is significant when considering the share those firms have of the stock exchanges.

“On the Kospi and Kosdaq markets, the companies in parts, material and equipment take up around 5 percent,” the spokesperson said, “So, the product stands out in including relatively more related stocks.”

“An investment product should always put return first,” the source said. “But when politics comes in, the product will be vulnerable to the whirlwinds of political wrangling.”