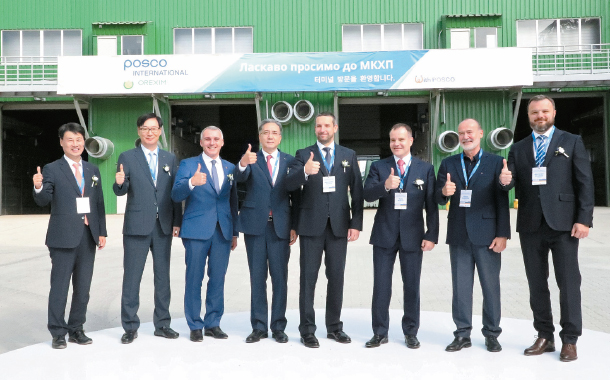 Posco International CEO Kim Young-sang, fourth from left, and related officials pose for a photo to commemorate the completion of a grain export terminal in the port of Mykolaiv in southern Ukraine on Tuesday. [POSCO INTERNATIONAL]

Posco International, a trading arm under steelmaker Posco, said Wednesday it completed construction of a grain export terminal in Ukraine and started operations.

The company said it is the first Korean firm to operate an overseas grain export terminal.

The terminal, 75 percent owned by Posco International, is located in the port of Mykolaiv, one of the major Black Sea export ports in southern Ukraine. The terminal is capable of shipping up to 2.5 million tons of grain including wheat, corn and soybean per year.

The company said the terminal will contribute to Korea’s food security. Korea depends on imports for most grain products, except for rice. According to data from Posco International, the country’s self-sufficiency rate for corn and wheat is around 1 percent.

“Korea is the fifth largest grain importer in the world, importing over 15 million tons of grain per year,” the trading firm said in statement. “It is necessary [that the country has] a system for stable grain supplies in case of a food crisis.”

By operating the terminal, Posco International can control logistics for a significant amount of Ukrainian grain shipped out from the country. Roughly 90 percent of Ukrainian grain is exported through ports by the Black Sea including Mykolaiv, according to the Korean trading company.

Expanding the food trading business is one of the 100 tasks Posco Chairman Choi Jeong-woo had proposed that the company and its affiliates should pursue marking his 100th day in office in November last year.

The terminal will be operated in partnership with Ukrainian partner Orexim Group, who owns the other 25 percent.