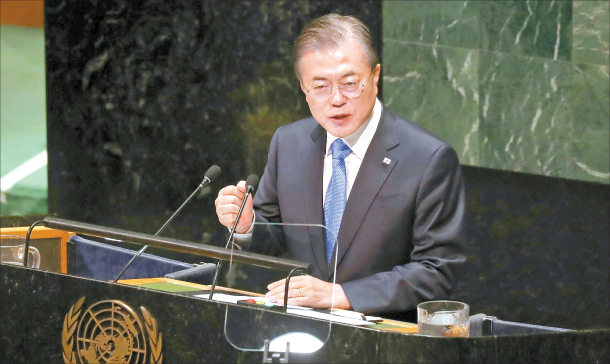 NEW YORK - President Moon Jae-in on Tuesday proposed transforming the demilitarized zone between the two Koreas into an international peace zone that will house UN offices and international organizations as an “institutional and realistic” security guarantee for the North.

Moon unveiled an ambitious proposal to remove mines from the DMZ, the world’s most heavily armed border, and develop the land in an address at the United Nations. Before the world leaders, Moon described the DMZ as “a colossal green zone that stretches 250 kilometers [155 miles] from east to west and 4 kilometers from north to south.”

He said that he and North Korean leader Kim Jong-un have previously agreed on the peaceful use of the DMZ.

“If we designate the area connecting Panmunjom and Kaesong in North Korea as a peace and cooperation district and transform it into a zone where both Koreas and the international community can jointly explore the path to prosperity on the Korean Peninsula,” Moon said, “and if the DMZ comes to house UN offices already stationed in the two Koreas and other international organizations related to peace, ecology and culture and emerge as a center for research on peace, peacekeeping, arms control and trust building, it can become an international peace zone in name as well as substance.”

Moon said about 380,000 anti-personnel mines still exist in the DMZ, and it would take 15 years for South Korean troops to remove them on their own. “However, cooperation with the international community, including the United Nations Mine Action Service, will not only guarantee the transparency and stability of demining operations, but also instantly turn the DMZ into an area of international cooperation,” he said.

“If North Korea makes sincere efforts to implement denuclearization, the international community should also reciprocate,” Moon said. “The establishment of an international peace zone will provide an institutional and realistic guarantee to North Korea’s security. At the same time, South Korea will also be able to gain permanent peace.”

Moon said he and North Korean leader Kim have already agreed on the peaceful use of the DMZ, and the two Koreas’ reconnection of severed inter-Korean railroads and roads has made some progress.

“All of these efforts constitute a process that will help solidify the foundation for peace on the Korean Peninsula and also contribute to peace and stability in Northeast Asia,” Moon said. “When the DMZ that cuts across the midriff of the Korean Peninsula is turned into a peace zone, the peninsula will evolve into a bridging nation that connects the continent and the ocean and facilitates peace and prosperity. The vision of an East Asian Railroad Community in which six Northeast Asian countries and the United States take part could also become reality.”

Moon also said once peace is established between the two Koreas, he will work together with the North to make the DMZ a Unesco World Heritage Site.

Before proposing the international peace zone in the DMZ, Moon also presented three key principles for his North Korea policy. He said they serve as foundations for the DMZ campaign.

“The first principle is zero tolerance for war,” Moon said, adding that the “longest-running armistice in human history” must be ended.

“When the security of both sides is assured, it will become possible to accelerate denuclearization and the establishment of a peace regime on the Korean Peninsula,” he continued. “At the very least, all hostile acts must be put on hold while the dialogue is ongoing.”

The third principle is co-prosperity, Moon said, prompting his campaign of a “peace economy.” He said the initiative will solidify peace and contribute to economic development in East Asia and the world.

Moon’s proposal for the DMZ development appeared to be an attempt to offer some kind of security guarantee for the North, while encouraging its denuclearization. If international organizations operated inside the DMZ, the idea goes, risks of armed conflict at the inter-Korean border will practically disappear.

It remains to be seen how the North will respond to Moon’s proposals. Moon’s predecessor, former President Park Geun-hye, made a very similar proposal of developing the DMZ into a park, which was snubbed by North Korea.

U.S. President Donald Trump also discussed North Korea briefly in his 35-minute UN speech. He called on the North to end its pursuit of nuclear programs for peace and prosperity.

“America knows while anyone can make war, only the most courageous can choose peace. For this same reason, we have pursued bold diplomacy on the Korean Peninsula,” he said. “I’ve told Kim Jong-un what I truly believe. That like Iran, his country is full of untapped potential. To realize that promise, North Korea must denuclearize.”

The rhetoric changed radically in his UN speech last year, which took place shortly after a summit with Kim in Singapore. “We have engaged with North Korea to replace the specter of conflict with a bold and new push for peace,” Trump said at the time.

In his speech, Trump also demanded allies pay more in defense cost-sharing. “All of our partners are expected to pay their fair share of the tremendous defense burden which the United States has bore in the past,” he said.

The remarks came as Seoul and Washington are negotiating defense cost-sharing. Since Trump took office, Washington has been pushing for Seoul to pay a much steeper share.

Earlier this year, the two sides managed to strike the current one-year deal, in which Seoul pays around 1.04 trillion won, which amounted to some $920 million at the time of implementation in March. This was 8.2 percent more than what it spent last year, or some 960 billion won, for the stationing of 28,500 U.S. troops in South Korea.