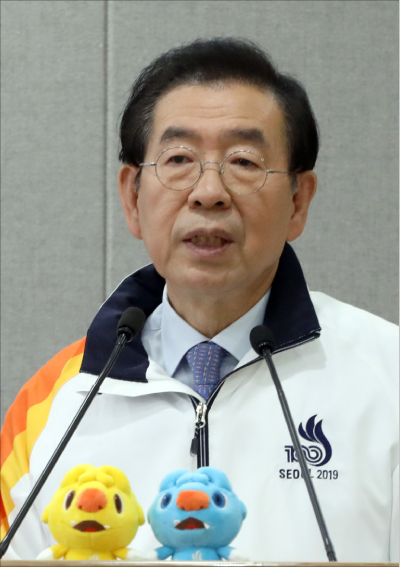 The 100th National Sports Festival, to launch across 57 stadiums in Seoul on Oct. 4, may pave the way for the Seoul-Pyongyang Olympics in 2032, said Seoul Mayor Park Won-soon in a press conference Wednesday. “I hope that the energy of peace and cooperation of the 100th National Sports Festival will lead to the successful hosting of the 2032 Seoul-Pyongyang Olympics,” Park told a group of reporters at the city hall.

Park has been voicing his interest in a joint bid with Pyongyang for the 2032 Summer Olympics ever since he returned from a trip to the North Korean capital in September last year as part of a special entourage that joined President Moon during his summit with North Korean leader Kim Jong-un. Moon and Kim, at their third summit, signed a joint statement that included an agreement to launch a joint bid to co-host the 2032 Summer Olympic Games.

Park had repeatedly told media outlets that Seoul is ready to host its second Olympics after the 1988 Games, especially following the renovation of sporting facilities throughout the city for the 100th National Sports Festival.

“All of the facilities have been renovated and are ready to go,” said Joo Young-tae, director of the Tourism and Sports Bureau of the city government, at the press conference. “There will be around 6,200 games participated in by around 30,000 athletes from 17 cities and provinces as well as 18 teams from overseas.”

The National Sports Festival will take place from Oct. 4 to Oct. 10 across 57 stadiums in Seoul including the Jamsil Sports Complex in southern Seoul and 15 other stadiums outside of Seoul. The sports festival has been held annually in Korea since 1920, when the two Koreas were one country. “We are turning a new chapter to the 100 years of sportsmanship among the people of Korea with the launch of the National Sports Festival,” Park said.

The festival will also hold special games for foreign residents this year.

“A total of 542 foreign residents, from 38 countries including the United States, China and France, will take part in the games,” Joo said. “There will be seven different events, namely, soccer, basketball, tennis, table tennis, badminton, bowling and track and field.” The opening ceremony will launch at 6:30 p.m. on Oct. 4 at the Jamsil Sports Complex, with the entrance of the athletes and special performances by some 2,220 artists and ordinary citizens. Upon the lighting of the torch and live performances by X1 and Mamamoo, the ceremony will close with large-scale fireworks by the Han River in the Jamsil area.