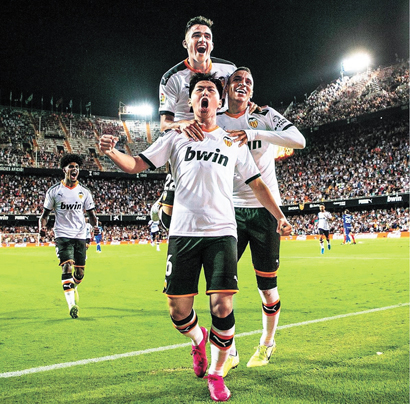 During Valencia’s match against Getafe CF at Mestalla Stadium, Lee scored his first La Liga goal. Joining the starting lineup for the first time, Lee scored in the 39th minute while Valencia was leading the match 2-1. Lee was also involved in the plays that created Valencia’s two other goals.

Despite scoring three goals in the first half of the match, Valencia had to settle for a 3-3 draw as Getafe scored two more in the second half.

After a draw in their sixth match of the 2019-20 season, Valencia is now ranked 13th in the La Liga standing, with one win, three draws and two losses, totaling six points.

Lee left the field in the 73rd minute as Goncalo Guedes came on off the bench. Following the match, Lee was given a score of 7.3 by whoscored.com, a football statistics website.

This is the second-highest score among Valencia players for Wednesday’s match.

Looking at scorers in general, Lee became Valencia’s third-youngest scorer ever in La Liga. Juan Mena and Fernando Gomez Colomer all scored their first goals when they were younger.

Including Cup matches, Lee is the fifth-youngest ever.

Lee is the second Korean football player ever to score a goal in La Liga. Before Lee, Park Chu-young, now of FC Seoul, scored for Celta de Vigo during the 2012-13 season.

Up until last season, Lee was given so little playing time that he requested a loan during the summer. However, things completely changed this season under Albert Celades, Valencia’s new head coach.

Valencia will play their next La Liga match against Athletic Bilbao at San Mames Stadium in Spain on Saturday.

Lee made his first public appearance during the third season of the KBS TV program “Shooting Kid” in 2007. The gifted youngster was only seven at the time and was labeled a football prodigy. Hailing from Incheon, Lee entered the youth academy at Incheon United before moving to Spain in 2011 with his family, where he was accepted into Valencia’s youth academy.

Lee has moved up the ranks at Valencia very quickly. In July 2017, he was promoted to the Juvenile A team and then in January, he was offered a professional contract and promoted to the Valencia B team.

During the 2017-18 season, the attacking-midfielder played 11 matches in Spain’s Segunda Division B league and scored one goal. But that was only the beginning. Last July, prior to the beginning of this season, the club announced the renewal of Lee’s contract.

Lee signed a four-year contract with a termination clause of 80 million euros ($90 million). His buyout was the second-highest among Valencia’s U-19 players.

After completing Valencia’s first team preseason training camp, Lee was promptly called up to the top team and made his debut for the club on July 25 last year, during a preseason friendly against FC Lausanne-Sport from Switzerland.

In August 2018, during another preseason match against German football club Bayer 04 Leverkusen, Lee scored his first goal for the club.

Although Lee didn’t make many appearances with Valencia for the rest of the season, he continued his success this year by leading Korea’s U-20 football team to a runner-up finish at the FIFA U-20 World Cup.

Lee’s win was quite impressive because the Golden Ball has traditionally been awarded to the best player from the winning team of the tournament. Korea didn’t win, but Lee still stood out enough to take the honor.