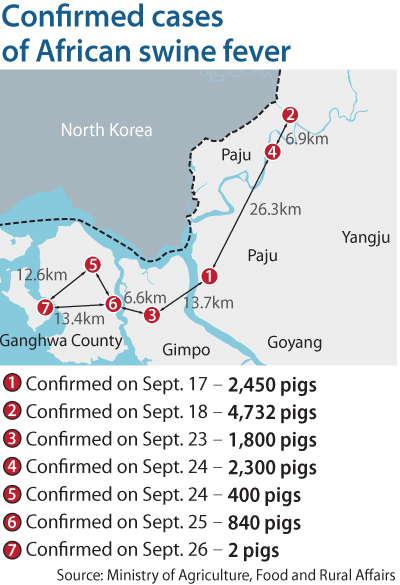 The government has ordered a new 48-hour lockdown on pig farms, slaughterhouses and related vehicles nationwide, the third of its kind in the past 10 days, as it confirmed a seventh case of African swine fever (ASF).

The lockdown will remain effective until 12:00 p.m. Saturday, according to the Ministry of Agriculture, Food and Rural Affairs on Thursday. The measure had originally been implemented on Tuesday for the second time after a fourth confirmed case of ASF and was due to expire on Thursday.

The latest confirmed case is located in Seongmo Island in the western corner of Ganghwa County. The farm had only two pigs.

In light of the seventh infected farm, the government is set to have culled a total of over 60,000 pigs since the outbreak was first reported last Tuesday.

While the virus remains contained in northern Gyeonggi, it has spread to the most western and eastern parts of the region.

The Seongmo Island farm is the most western infected site, while the second confirmed case is located in Yeoncheon County, which borders Gangwon.

The government is conducting nationwide disinfection and has also set up checkpoints near farms in areas affected by the disease.

Despite strengthened measures, there were four new suspected reports of ASF on Thursday - two in Yangju, which is also in Gyeonggi, one in Yeoncheon County and one in Ganghwa County. They were not confirmed as of press time.

An Agriculture Ministry official explained that an investigation into the cause of the disease is ongoing, but results will take a long time. The government confirmed that vehicles have traveled between infected sites in the past three weeks but explained that it is too early to make a definitive conclusion on the cause of the spread.

ASF, which is fatal to pigs but harmless to humans, spreads through direct contact between infected animals or through contaminated feed.

North Korea, which confirmed an outbreak in May, is a likely source of the virus’ spread, considering the infected sites’ proximity to the border.

South Korea’s spy agency reportedly told lawmakers that there were signs that the disease has spread across North Korea and that containment measures have not been properly implemented during a briefing for the National Assembly’s Intelligence Committee this week.

The government is faced with limited options to control the spread of the disease other than the regular protocol of disinfection, culling and physical containment as ASF has no effective vaccination for prevention or treatment. Authorities resorted to vaccinations when containment measures failed during past outbreaks of foot-and-mouth disease.