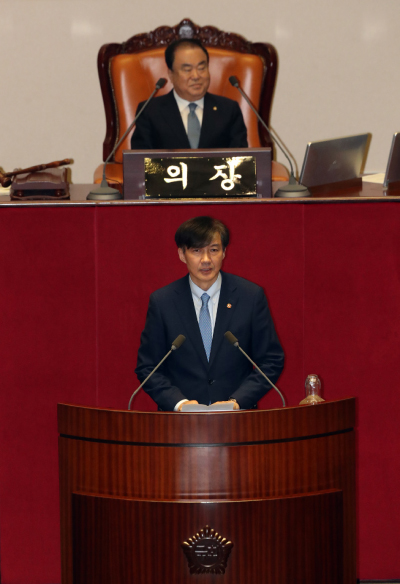 Justice Minister Cho Kuk’s younger brother was grilled Thursday about the family’s private school foundation, as prosecutors ramp up their probe of their own boss.

Cho’s brother, who runs a construction firm, and his ex-wife won a construction contract from the Ungdong School Foundation, owned by the Cho family, in 1996 worth 1.6 billion won ($1.3 million) and have been accused of not completing the job. The money was never paid, and in 2006, the pair sued the foundation for 5.1 billion won, which was supposed to include interest accrued on the unpaid bill.

The ex-wife was also questioned.

They won the suit after the Ungdong School Foundation chose not to fight it, but prosecutors suspect the suit may have been deliberately arranged by Cho family members as a way to embezzle the foundation’s funds. Minister Cho and his wife Chung Kyung-sim were both board members of the foundation at the time of the lawsuit.

In 1997, the middle school was moved from its original location in urban Changwon to a more remote, larger space. Construction on the school’s new campus was done by Cho’s brother’s company.

Prosecutors base their suspicions on testimony from school foundation associates who claimed Cho’s brother did not build a tennis court and other facilities in the contract.

After heavy media scrutiny of his family’s wealth following his nomination as justice minister, Cho on Aug. 23 promised that his mother, who ran the school foundation since his father died, would step down as chairperson. He also pledged it would be donated to the state or a public foundation.

Prosecutors probed other aspects of the Cho family’s wealth Thursday, notably a private equity fund they are suspected to have effectively operated. The fund, Co-link Private Equity, invested a majority of its assets in a small tech firm called Wellscnt in mid-2017, when Cho was senior secretary for civil affairs at the Blue House. Shortly after, the firm’s value started to take off after it landed deals with a number of local government offices and public companies, leading to suspicions of a conflict of interest.

Earlier this month, prosecutors requested an arrest warrant for Wellscnt’s CEO, identified only by his surname Choi, accusing him of embezzling around 1 billion of the approximately 1.38 billion won in investments that his company received from Co-link Private Equity. Cho’s first cousin once removed, who effectively owned Co-link, is accused of receiving that 1 billion won in checks and attempting to launder it through debentures.

With some testimony suggesting that Cho’s wife, Chung, played a key role in running the private equity fund, prosecutors are looking into whether she was involved in that alleged money laundering. Chung is expected to be summoned for questioning by prosecutors imminently.

The probe is also looking into accusations of underhand dealings in his children’s academic careers.

At his first parliamentary question time at the National Assembly on Thursday, Cho delivered an opening address to lawmakers on prosecutorial reforms. Opposition lawmakers from the Liberty Korea Party turned their chairs backwards and faced the opposite direction in a sign of protest.

While the ensuing question-and-answer session was largely comprised of attacks by opposition lawmakers, Cho told Rep. Lee Tae-kyu, a member of the opposition Bareunmirae Party, that he would consider resigning from office if he was summoned by prosecutors for interrogation.