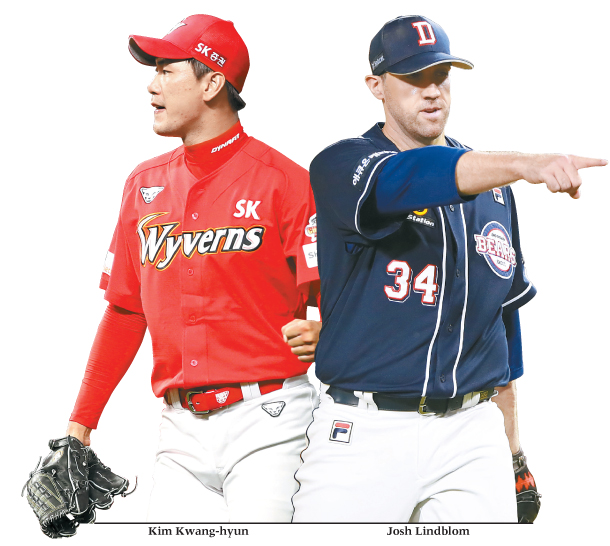 With just a few games left in the KBO’s regular season, the SK Wyverns and Doosan Bears are still locked in an intense battle for first place with no clear winner in sight. This is a far cry from last year, when the Bears ended the season a huge 14.5 games ahead of the Wyverns.

As the Wyverns had a game scheduled last night, that standing will have changed. If they lost their game against the Samsung Lions last night, Doosan will now be in first place based on the two teams’ head-to-head record. If the Wyverns won, they will now be one game ahead of the Bears with three games left to play.

Either way, it’s far too close to call.

But this dramatic end to the season has come as a bit of a surprise to fans. Until very recently, it looked like the Wyverns would run away with the regular season title. In fact, just over a month ago, on Aug. 24, the Wyverns were a full 7.5 games ahead of the Bears. If it wasn’t for an unfortunately timed slump for SK and a strong month for Doosan, the final standing would already be determined.

This season, the Wyverns have one of the best pitcher lineups as they are ranked second in the league in ERA at 3.54. However, their batting lineup is seriously struggling. The team has a 0.263 batting average, which is only good enough to see it ranked seventh in the league.

Looking at the Wyverns’ batting lineup, Han Dong-min’s slump is the most concerning this season. Han, the reigning Korean Series MVP, is not only struggling to hit home runs but is also failing to produce hits. Just for the month of August, Han had a 0.231 batting average with only two home runs. This month, it got worse.

As of 6 p.m. on Friday, Han has a disappointing 0.200 batting average with no home runs this month.

Han isn’t the only one. Long balls are a problem for the entire Wyverns’ lineup. Last season, the Wyverns hit the most home runs, but this year, they are far from that record. After their 140th game, the Wyverns had hit 110 home runs, good enough to be ranked fourth.

This is a significant difference from last year when the Wyverns finished the season with 233 home runs.

The Wyverns’ slump may be markedly different from last year when the Bears dominated for months, but it’s actually very similar to the 2017 season. Back then, the regular season champion wasn’t determined until the very last game of the season. At the time, the Tigers held a one-game lead over the Bears.

Last year, the Bears finalized their regular season victory while there were still 12 games left to be played. By winning the regular season, the Bears became the first club in the KBO to advance to the Korean Series for four straight seasons.

While the excitement is mainly focused around the Wyverns and the Bears, the Heroes are technically still in contention for first place. However, as they now only have two games remaining, their only chance would be for the Bears and the Wyverns to start losing - a lot.

But looking at recent performance, the Heroes may still be in with a shot. Over the last ten games as of 6 p.m. Friday, the Wyverns have only won three, losing seven. The Heroes, by comparison, have won six and lost four. The Bears have won six, lost three and tied one. If the team’s continue this trajectory, the Wyverns could end up throwing away the pennant in the final few days.

The Heroes may have a harder path to the title, but they do have a secret weapon.