The character of Joker has been an icon of chaos and rebellion for decades. Readers of the original comic books or viewers of television and movie adaptations are familiar with his indifference to extreme cruelty, and, of course, his maniacal laugh. TV and films have never probed the character’s origins. Joker always started at mid-point - he was the crazy one, trailing chaos in his wake.

But lunatics are made, not born. What was Joker’s childhood like? The director Todd Phillips decided to take on that question, stretching his imagination to find how a lonely but harmless social outcast might become the infamous villain we know today.

Phillips’ “Joker” has sparked interest amongst moviegoers around the world, especially since award-winning actor Joaquin Phoenix portrays the character. The film even won this year’s Golden Lion award at the 76th Venice International Film Festival in September, a rare feat for a movie based on comics.

The setting is Gotham City in the early 1980s. The economy is failing, the administrative agencies are all on strike, the gap between the rich and the poor continues to yawn, and in the midst of all this carnage (to quote a cartoon-like U.S. president) is Arthur Fleck, a desperate stand-up comedian wannabe. Fleck supports his frail mother by working as a clown. He has a neurological condition called pseudobulbar affect (PBA) - he laughs uncontrollably at inappropriate times.

“The worst part about having a mental illness,” Fleck confides in his joke journal, “is people expect you to behave as if you don’t.”

His transformation into the Joker doesn’t happen overnight. Fleck’s life is a series of small tragedies inflicted by the people and the city he lives in. Eventually, the Joker arises. 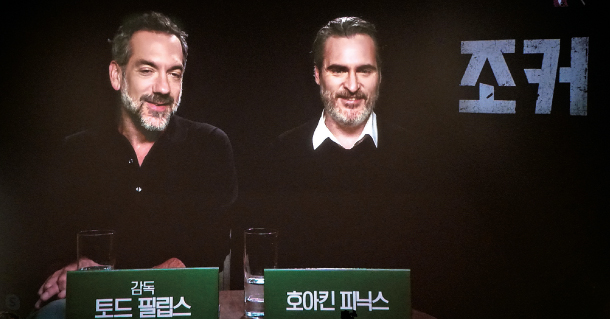 In a live video conference at CGV Yongsan, central Seoul, on Thursday evening, the director and star took questions from the Korean press. Phoenix took the role seriously both physically and mentally. According to reports, he went on an extreme diet - sometimes eating one apple per day - to lose 23 kilograms (51 pounds) to portray the wizened Fleck.

However, he seemed to be healthy during the live press conference, although he admitted the role was difficult to the degree that there were days when he “just wanted to leave” the set.

Nevertheless, the actor stressed that the challenge - more than anything - inspired him to embed himself more deeply into his role.

“This was the kind of movie where the more you put into it, the more it gave back to you,” Phoenix said. “That was something that was just where [the hardships I’d faced] were reciprocated.”

Phoenix and Phillips built the character together, and even off the set they were constantly swapping ideas. Phillips is best-known for his comedies, winning a Golden Globe Award for “The Hangover” (2006) and an Academy Award for Best Adapted Screenplay in “Borat” (2009).

As it happens, one of the Joker’s lines in the screenplay is: “I used to think that my life was a tragedy. But now I realize, it’s a comedy.”

The film takes on a slightly dreamlike quality as Fleck evolves into the Joker. At some points in the film, the audience isn’t sure what is actually happening or what exists only inside Fleck’s head.

The director wants to let the audience decide.

“I thought it was important that we end it on a non-definitive note,” Phillips said when asked to decipher what was real and what wasn’t in the film. “It’s not something that I’m willing to answer, so to speak, because we’re going to ruin people’s interpretations. And I think it’s important that everybody gets to have that experience - it’s really part of the film.”

Although Gotham City is a fictional world, it isn’t that distant from our own reality.

“While the movie is clearly set in the late 70s or early 80s, we wrote it in 2017, so as always, movies tend to reflect what’s going on in current times and I’m very proud of that,” Phillips said. “[It’s] a little bit about childhood trauma, which has existed forever. It’s a little bit about socioeconomic status, and it’s a little bit about the way we treat the less fortunate, and I think those are all themes that, when being explored, can lead to discussion and that’s a good thing. So I’m happy when people notice those themes.”

Phillips said social inequalities in his movie’s world don’t make it easy for people like Fleck to live sanely, especially when he is cut off from his treatments and medication when the city cuts its budget for social services.

When asked about the film’s win at the Venice Film Festival, Phillips said the film explores a different part of the comic book universe.

“I think people were surprised by it,” Phillips said. “I think they respond to the tone of the movie and I think most of all they respond to Joaquin’s performance - which to me is just transcendent - so ideally the movie will be remembered for that performance and for the fact that we just tried to do something very different in the comic book space.”

What did Phoenix think of his predecessors at the Joker?

“I’d seen Tim Burton’s ‘Batman’ and ‘The Dark Knight’ when it came out, but it felt like we were starting something that was new,” Phoenix said. “We wanted to create our own understanding of the character, his own history, so I didn’t really refer to any other movie or characters. I really was explicitly unaware of the impact the characters had on people and so it wasn’t that until I did press for the film and I was repeatedly asked about it in questions like this that I became hyper-aware of what an impact the other actors who’ve played this character have had.”