Bae Soon-hak, the curator and director of the National Sports Festival for the past three decades, speaks to the JoongAng Ilbo at the Korea Sports Museum, located within the Korea National Training Center in Nowon District, northern Seoul, on Aug. 20. [LIM HYUN-DONG]

The annual National Sports Festival, which will be hosted for the 100th time this year, will launch at stadiums in and around Seoul on Oct. 4.

To commemorate the centennial of the event that was held even through the Korean War (1950-53), the JoongAng Ilbo spoke with Bae Soon-hak, the curator and director for the past three decades. Bae is now an adviser to the Korean Sport & Olympic Committee.

“I joined the organizing committee when the games were held for the 41st time,” Bae said. “So much has changed since then. I remember in the 1960s, we had to ask some 12,000 students to help organize the games.”

The National Sports Festival began in 1920 and has been held almost every year since in different cities. This year’s host is Seoul and games will be held in 57 stadiums including the Jamsil Sports Complex.

This year the festival will be joined by some 30,000 athletes, including at least 18 teams of overseas Koreans, according to the organizing committee.

The torch relay will last for 13 days and involve 1,100 participants who will run 2,019 kilometers (1,254 miles) to four different locations to light the torches: Mount Mani in Incheon; the Dokdo islets; Imjingak, a village near the military demarcation line; and Mara Island, an island south of Jeju Island.

“The National Sports Festival was an annual sporting event at the center of people’s attention for years,” Bae said. “I hope that the event will regain that kind of status and image in the country.”

The following are edited excerpts of an interview with Bae, who recounted various episodes in the history of the National Sports Festivals that he personally experienced or that he was told about first hand. 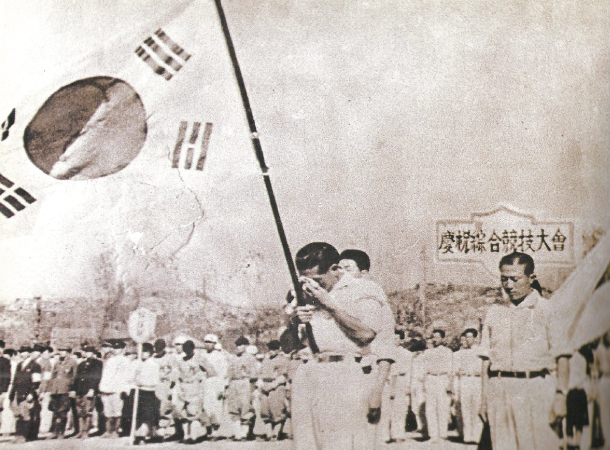 Sohn Kee-chung, who won gold in the marathon of the 1936 Berlin Olympic Games, is seen overcome with emotions as he holds up the Korean flag at the 26th National Sports Festival in 1945, the first to be held since Korea gained its independence from Japan. [KOREAN SPORT & OLYMPIC COMMITTEE]

Don’t let the mailmen in

The National Sports Festival was held for the first time in 1920, as a baseball game. The event began to expand from 1925, holding baseball, basketball and track and field events. Into the 1930s, the event added other sports such as judo, ssireum (Korean traditional wrestling), ice skating, table tennis and volleyball. And in the years following, marathon was also added.

But there was a certain group of people banned from taking part in the marathon event.

“In the early years of the annual festival, Korea did not have professional marathon runners,” he said. “So all the runners taking part in marathons during the festival were amateurs. Because of that, the organizing committee had to ask all the mail deliverers to not take part in the event. Young people may not remember, but back in those days, mail delivery people were some of the fittest and fastest runners in the country.”

Held through the war

“That year was supposed to be the 31st event. That was never held,” Bae said. “Like the rest of the country, the organizing committee had to flee from the war. It moved its office to Busan.”

The organizing committee then contacted athletes throughout the country who had also fled their homes and hosted the 32nd National Sports Festival in Gwangju in 1951.

“The committee had to ask soldiers to help organize the event,” Bae said. “We had a marathon runner, Choi Yun-chil, from South Gyeongsang, who set a world record in the Men’s Open Marathon of 2 hours 25 minutes and 15 seconds.”

Choi was a runner who had come in third place in the Men’s Open at the Boston Marathon in 1950. Koreans made headlines in the Boston Marathon that year, as they came in first, second and third places. Ham Kee-yong came in first with 2 hours 32 minutes and 39 seconds, followed by Song Kil-yoon who finished the race at 2 hours 35 minutes and 58 seconds.

“The world celebrated the spirit of athletes in Korea as the country hosted the National Sports Festival even through the war and sent athletes to the 1952 Summer Olympics in Helsinki, Finland,” Bae said.

Bae recalled some festivals that tried to include more spectators than was possible.

In the 46th National Sports Festival held on Oct. 5 in 1965 in Gwangju, tens of thousands of people had gathered at a stadium in Gwangcheon-dong, Gwangju, by 5 a.m.

A similar incident took place in the 1957 National Sports Festival hosted in Busan, Bae said. Three students lost their lives in a stampede to get into the sports complex.

The 1982 National Sports Festival took place just a few years before the 1986 Asian Games and 1988 Summer Olympics in Seoul.

“The plan at the time was to build one main stadium in each major city of the country to prepare for the upcoming international games,” Bae said. “The Masan Stadium in Changwon, South Gyeongsang, was one of them. But guess what happened just a day before the National Sports Festival launched in Changwon in 1982.”

The workers had made a mistake with the lines on the track, and the 400-meter ring was 40 centimeters (5.7 inches) short.

A number of athletes set records at the National Sports Festivals and went on to make names for themselves at international competitions.
Chun Byung-kwan, a weight lifter who won silver and gold medals at the 1992 Summer Olympic Games in Barcelona, Spain, was one of them.

“Chun set records during the 1987 National Sports Festival,” Bae said. “He then went on to win medals at the Olympics in Barcelona.”
Swimmer Park Tae-hwan, who won a gold medal in the 400-meter freestyle and a silver in the 200-meter freestyle at the 2008 Summer Olympic Games in Beijing, was also a participant in the National Sports Festival in 2005.

He set Korea’s record when he finished the 400-meter freestyle in 3 minutes 50.16 seconds at the event. He was a freshman at Kyunggi High School in southern Seoul.