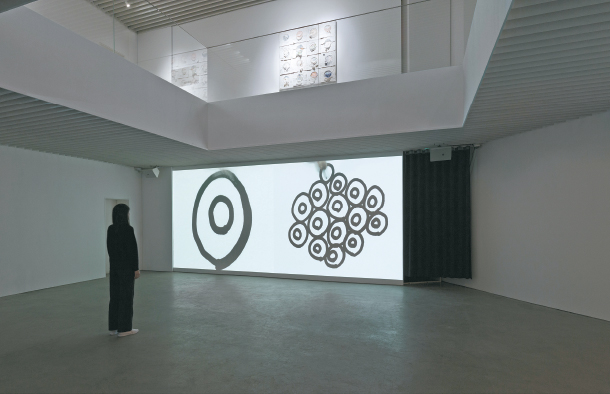 A six-minute video titled “Drawing Instrument” (2018) by Liza Lou portrays Lou humming while drawing circles, highlighting the sounds of the days spent working on her art. The work is located in the basement floor of the Songwon Art Center in central Seoul. [LEHMANN MAUPIN]

There’s a Buddhist parable that begins with a wide river in front of you. Suppose you successfully build yourself a wooden raft with the resources you find and get yourself across the river. While collecting the wood, you cut and bruise yourself all over, but the raft gets you to the other side and you can continue on with your journey again. Do you carry the raft with you or leave it there on the riverbank once you have reached your goal?

The parable isn’t a question about whether you can carry the weight of a heavy wooden raft. It asks whether you have the will to let go of the means that got you to your end - something that’s engraved with the time and effort you spent to make it work. To this question, American artist Liza Lou would take the lesson of building the raft and leave the raft behind, in a practice that she has dubbed “Minimalism with heart.”

“The raft embodies the struggles of making art, the form of the art,” said Lou. “Thirty years ago, I had trouble letting go of the raft, especially since it took me five years to make my first work. Now, I go with the flow of the river. I learned to allow myself to go with the spontaneity, which is a lot more risk-taking. The lesson of leaving it behind is continuous, but I am willing to go in the flow.”

Lou rose to stardom with her room-sized sculpture “Kitchen” at the New Museum in New York City in 1996, for which she spent five years covering a whole space with beads. There, she fused the idea of beads as not only craft materials but fine art, also bringing to light the overlooked labor of women symbolized by the weaving of beads. With her first solo exhibition in Korea held at Lehmann Maupin and Songwon Art Center, central Seoul, titled “The River and the Raft,” Lou asks viewers the same question. But before just simply asking the audience whether they’re ready to throw away the fruits of their effort, Lou displays her own pieces of work that are the very definition of diligence.

Lou uses blocks of tiny glass beads woven by herself and women from KwaZulu-Natal, South Africa, for her works. Every piece of artwork is the result of not just strenuous mental endeavor, but the traces of each movement that pieced the beads together. From afar, her latest work “Sunday Morning” (2019) looks like a canvas painting with a rough surface. But up close, each bead’s different color is visible, like the pixels of a digital screen.

She takes a step further in playing with the idea of having glass bead cloth, by fully exploiting the beads’ three-dimensionality with works such as “Psalm 51” (2019). The painting has three depths to it: the lowest canvas painting and the two cloths above the painting. The bead cloths on the top, however, have been torn apart to create a hole that shows a part of the painting underneath it, “like a portal that takes [one] to another level.”

“I thought about what beads could do that canvases can’t,” Lou said. “So that’s where I got the idea of the three-dimensionality of the material. I weave the cloth, then hammer the parts to remove the parts of the bead. I focused on the anonymity of the labor, the invisible labor that’s inherent in the works but something that we can’t see. By taking a layer of beads away, it magnifies how something was actually made. What was hidden is revealed.”

Another way Lou highlights the beauty of labor and sheds light on the hours spent making a single work is through her video “Drawing Instrument” (2018). The six-minute video is quite simple. Lou recorded herself humming while drawing a pattern of small circles with a certain pitch. With one circle, you hear an “ah,” and if the screen is divided into two scenes, you hear a harmony of two “ah”s. It’s straightforward, but at the same time embedded with the work that viewers can’t see in the gallery.

“It’s a symphony of my process,” she said. “It’s the many days of my work pieced together. It highlights the performative aspect of work, almost like making a soundtrack. It started from the question, ‘What does art sound like?’ And that’s when I thought about when I was working with the women in South Africa; the laughter of the women, the birdsongs outside, the sounds of the bead dropping on the floor. It’s the many days and moods of when you make art.”

The ultimate question for Lou, however, is for herself as an artist. Why be an artist, and what value does art have?

“In art, there’s the beauty of caring,” she said. “The technique of love and caring is there with every work. It’s a tender quality that’s missing these days.”

The exhibit will be held until Nov. 9 at the Lehmann Maupin and Songwon Art Center, in Samcheong-dong, central Seoul. Admission is free.