A cultural hub for the people

A cultural hub for the people 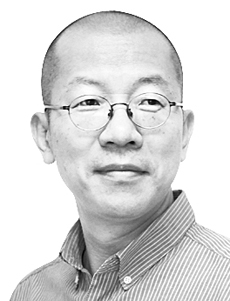 Seo Hyun
The author is an architect and a professor in the department of architecture & architectural engineering at Seoul National University.

“The Han River Art Island has been born!” This phrase was first spotted on promotional posters years ago around the capital, in reference to Nodeul Island, which lies in the middle of a section in the Han River in Yongsan District, central Seoul. Seoul officials, at the time, said the island would be a “cultural hub” housing an opera theater, a concert hall and an art museum, among others. But the cultural hub never came into being.

The Seoul Metropolitan Council scrapped the ordinance on which the project was based, and the Seoul mayor at the time, who was supposed to convince the council to push the initiative through, stepped down after the failure of his free school lunch campaign. The so-called art island was left without art.

It’s difficult for a city council to go against plans to create cultural facilities. But Nodeul Island was no ordinary art project — its critical problem was its bad location. Its natural landscape was appealing enough for visiting tourists to take photos of, but it was isolated from the rest of the city. To improve accessibility, the city would have had to expand its public transportation system and provide funding to cover much operational and maintenance costs. No wonder why the Seoul Metropolitan Council did not give it the green light. 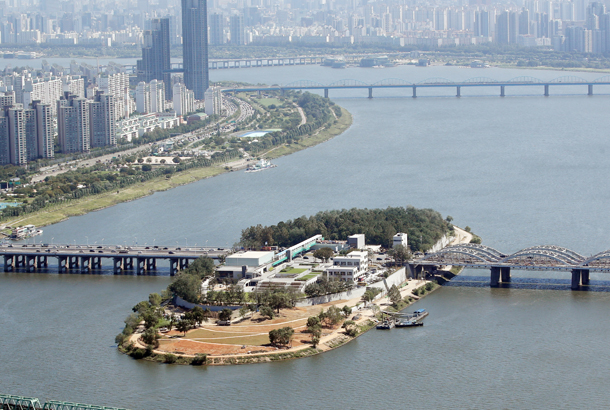 Nodeul Island, which lies in the middle of the Han River in Yongsan District, central Seoul, has been renovated with greenery and multipurpose cultural facilities. The Seoul city government opened the island to the public on Saturday. [YONHAP]

Nodeul Island soon became a headache for the Seoul Metropolitan Government. The next Seoul mayor, Park Won-soon, was a far more prudent person. He organized a relevant committee, tried to canvass opinions from Seoul citizens through surveys, idea contests and a student design camp and invited experts to a workshop to share their opinions.

When the time came to whip something up, a master planner was appointed to carry out whatever would be necessary. The master planner’s roles and authority were not clearly stated, but he was basically in charge of making decisions that Seoul city officials would find hard to take responsibility for when things turned out bad.

The master planner was in charge of planning the art island project, not designing facilities that would be incorporated into the project. The first key point of planning an architectural project is to find the project’s virtue, which leads to defining the direction toward which the project should be headed. Then comes deciding on a method of operation, and finally, processing that method. At the beginning of all architectural planning comes questioning the project’s reason of being. 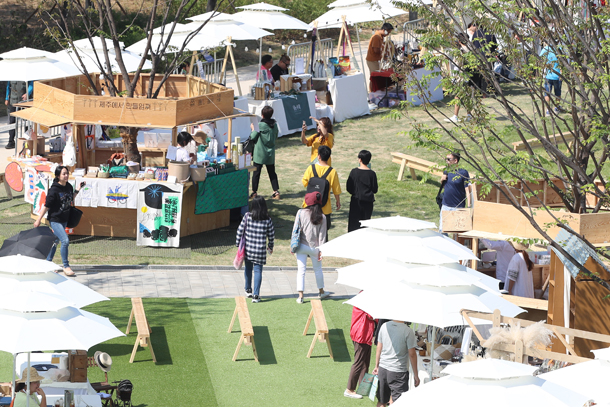 People visit a temporary market on Nodeul Island on Saturday after the Seoul city government officially opened the island to the public. [YONHAP]

There were various opinions from the public regarding what to do with Nodeul Island, but overall, the people’s opinion was quite simple — it’s impossible to have the isolated island become a cultural base for the local community, but it would be a perfect venue for “exotic experiments.” The logic was that because Nodeul Island is hard to access, it would make a great space within the capital city where people could relax; a place that teaches people that it’s not aliens that are a threat to Earth but rather climate change and that no superhero is going to fight against that villain for us; and a place where people could see other people first, not buildings.

And by that consensus, the order of the project changed. Instead of constructing buildings first and searching for an operator, the city government decided to choose a business plan from a public contest and appoint whoever submitted that plan as the operator of the cultural island initiative. The winner was someone who suggested creating a cultural space focused on K-pop. The judges could have chosen a conglomerate who made a submission to the bid, but the judges eventually went for the bidder who lacked experience yet seemed to have enough zeal to overcome that shortcoming.

The operator came up with the facilities needed for his/her chosen business plan, and based on those ideas, an architectural design contest was held to choose who would bring those facilities to life. The winning bidders were mostly budding architects, just as new to the scene as the operator.

Each step from there on was not easy, to the say the least. A path not taken is a dangerous one indeed, even if everyone on board agrees on the final destination, and the Nodeul Island art project took small steps at a time, wiggling throughout the way. In the end, the operator pushed through all those obstacles. The fact that no one in the project disagreed to the argument that they had to preserve the habitat for narrow-mouthed toads on Nodeul Island went to show how mature Korean society has become. After the architects were selected through the public bid, the master planner retreated from the spotlight, allowing them to carry on with their work — and is now sitting here writing this column.

Those who remember the colorful ads promoting an extravagant opera house on Nodeul Island may wonder what exactly is on the island right now. As the project’s master planner, our intended goal went like this:

“If citizens come together to form a society, then how can a free and equal civic society expresses itself? Elites cannot complete a society or a city on their own. How can the next generations actively intervene in the making of this island and accumulate their traces? A democratic society determines value not by the conclusion which it holds, but by the process through which members of that society had to go through to reach that conclusion.

What we’re trying to seek through this island art project is not some fancy architectural structure, but a monument that symbolizes democratic process. I hope our next generation treasures the entire island not by a single structure, but by the historic and artistic values that this island embraces. The true judges of this public bid will be the citizens of the next generation.”

Physically speaking, Nodeul Island could be compared to the checkerboard used in baduk, or the game of Go. But it’s the stones that visitors must focus on, not the lines passing underneath them.

The people who visit the island are the most crucial aspect of the art project. Our society is never complete, and neither is our city. They’re just constantly changing for the better. Nodeul Island, therefore, will never be complete. That’s the very philosophy of the project. Only its opening day will be remembered: last Saturday.