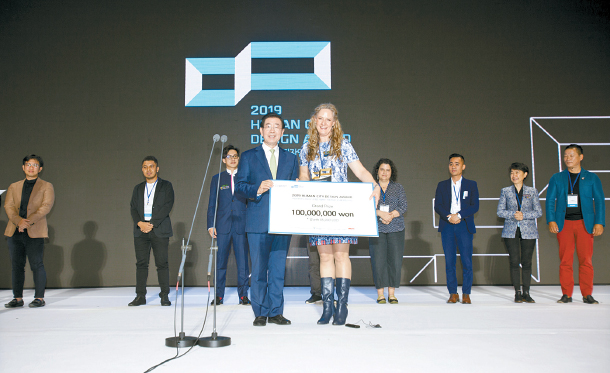 The first Human City Design Award was given to South Africa-based Dunoon Learning and Innovation Project on Thursday, along with a 100 million won ($83,400) prize.

The award ceremony took place at the Dongdaemun Design Plaza (DDP) in central Seoul. Seoul Mayor Park Won-soon delivered the award to Liezel Kruger-Fountain from the Dunoon project. In the afternoon, representatives from each of the 12 finalist teams, including Kruger-Fountain, gave short presentations about their works.

The award was introduced by the Seoul Metropolitan Government and the Seoul Design Foundation this year to support projects that provide “creative solutions to complicated urban problems.”

This year’s winner is a government-led project that’s been designing public facilities for the residents of Dunoon, an area of Cape Town where the project is based.

Dunoon was initially planned to fit 3,000 families, but rapid urbanization led the area to be home to 16,000 families by 2015. To provide better living conditions for the residents, the project led the construction of a state-of-the-art sports complex and library. Featuring a colorful mural on its walls, the library is intended to serve as a beacon of hope and provide safe spaces for learning, along with a stunning view of Table Mountain from the roof.