Technology centers equip students, teachers with skills for the future

Technology centers equip students, teachers with skills for the future

The Korean government takes the fourth industrial revolution very seriously. It’s rolled out radical policies to foster development in artificial intelligence, robotics and virtual reality and prepare Koreans to keep up with the rapid pace of technological progress.

One major change was introduced to the education system last year to equip students with some of the basic tools they’ll need in the digital era - computer coding lessons are now mandatory in schools.

The hours aren’t long, with only a minimum of 17 hours required in elementary school and 34 hours in middle school. In the classes, younger students are taught child-friendly programming languages in programs like “Scratch” which uses block shapes to create projects, while older students are exposed to more advanced languages.

To ensure that students across the country can excel in the new subject, the National IT Industry Promotion Agency (Nipa), a quasi-government organization that operates under the Ministry of Science and ICT, is busy delivering training and resources to rural areas so that no student gets left behind. 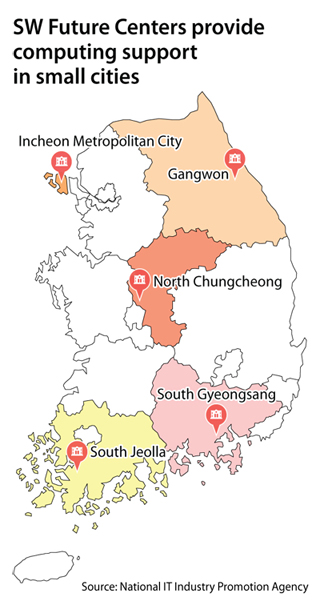 “The infrastructure to learn computing is very well-established in Seoul, but other regions lack quality education,” said director Jung Su-jin of the Regional Software Innovation Team at Nipa. “So from this year, we’ve been focusing on creating an environment where students, especially in regions that have less accessibility, can learn about programming.”

How do they go about doing this? Because Nipa doesn’t have jurisdiction over what’s taught in schools, they’re focusing on extracurricular opportunities, specifically by creating so-called SW Future Centers that offer computing lessons to children outside of school and provide time and space to play around with state-of-the-art technology. SW is a common acronym used in Korea to refer to software.

“We’ve selected five rural regions this year to construct SW Future Centers,” Jung said. “Each year, we are planning to train 100 people in every region who will be able to reach out and educate 3,000 students. We will select five additional regions to set up centers every year, bringing the total to 15 by 2021.”

This year, the five regions that were chosen were Incheon, Gangwon, North Chungcheong, South Gyeongsang and South Jeolla. A 35 billion won ($29.4 million) budget has been set aside just for these five regions in the next three years.

Besides constructing the physical centers and equipping them with programming devices, an integral part of Nipa’s project is to train people to become qualified teachers in computer education.

All teacher hopefuls need to fulfill 160 hours of mandatory training before they can be sent to schools or community centers in the province or city that request their services. Although they are all exposed to key ideas like block coding and physical computing, teachers are trained in different specialties according to region. In Incheon, home to Korea’s largest airport for example, teachers were trained to recreate Incheon International Airport using 3-D printing and use drones to imitate air travel.

Teacher training not only benefits students, but also is expected to invigorate the job market as well. Largely comprised of women, young people and retired computer science professionals, the teachers are trained for free and receive more than the national minimum wage when they go out into the field, which they began this summer.

“We’ve found that nearly 90 percent of the teachers who apply to train with us are women who’ve left the workforce,” said Lim Yun-ji, who helps manage the project in Incheon. “They’re really passionate about what they do and often stay late after classes in the lecture rooms to plan teaching materials for the children.”

To improve their services, officials from Nipa are keen on sharing ideas with education authorities from countries with a longer history of teaching technology to students. In early September, Jung and key managers from the Gangneung Science & Industry Promotion Agency and Incheon Technopark, the two bodies in charge of SW Future Centers in Gangwon and Incheon, travelled to Tallinn, Estonia, and London to meet with educational organizations including Britain’s Department for Education. There, they discussed the importance of teacher training and gender diversity in programming and explored ways to work with both private and public organizations.