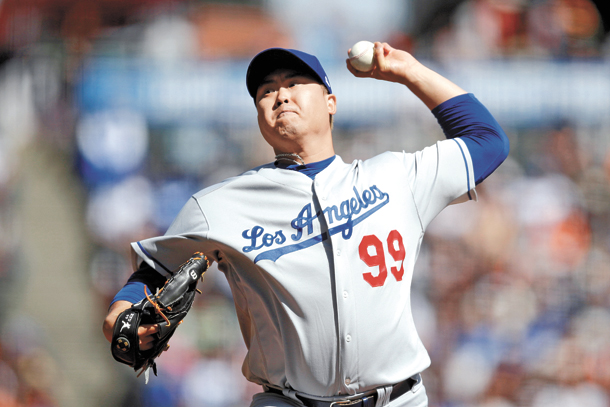 This was as strong a finish to the 2019 regular season as Ryu Hyun-jin could have asked for.

The Los Angeles Dodgers’ Korean starter wrapped up his first career ERA crown with a 2-0 win over the San Francisco Giants at Oracle Park in San Francisco on Saturday. Ryu tossed seven shutout innings to finish the season with a 2.32 ERA, the lowest in all of baseball.

It was the icing on the cake in a Cy Young-worthy season for Ryu, who got the Opening Day nod in March, earned the National League (NL) Pitcher of the Month award for May and made his first career All-Star Game start in July.

Ryu entered this contest with an ERA of 2.41, only 0.02 ahead of Jacob deGrom of the New York Mets. DeGrom, the 2018 NL Cy Young Award winner, had thrown seven scoreless innings in his final regular season start on Wednesday. And Ryu needed to limit the Giants to two runs in at least 6 1/3 innings to stay ahead of deGrom.

But with seven scoreless frames, in which he struck out seven and walked none, Ryu made sure there was no need for any number crunching. He sat down the first 10 San Francisco batters of the game, a stretch that included five strikeouts and no batted ball leaving the infield.

Ryu allowed two singles in each of the fourth and fifth innings but pitched out of those jams with ease. Ryu’s first out of the game came via strikeout from Donovan Solano on a changeup, and he retired his final batter of the game, Joey Rickard, by getting him to swing on a 1-2 changeup.

Ryu issued the fewest walks among all qualified starters with 24 and had the lowest walks per nine innings in baseball with 1.23. His strikeout-to-walk ratio of 6.50 places him second in the NL.

This is the pitcher who missed the entire 2015 season following shoulder surgery and made just one start in 2016 before shutting things down with elbow problems. He was a mediocre 5-9 with a 3.77 ERA in 2017 and was limited to 15 starts due to injuries last year while posting a 7-3 record and a 1.97 ERA.

Ryu was in line to test the open market as a free agent after last season, but he chose to bet on himself by accepting the Dodgers’ one-year qualifying offer of $17.9 million.

Ryu, 32, hit the ground running at the beginning of the season. He won his first career Opening Day start with six innings of one-run ball against the Arizona Diamondbacks on March 28. He suffered a groin injury during an April 8 start against the St. Louis Cardinals but ended up missing just one turn in the rotation.

Ryu had a brilliant month in May, in which he went 5-0 in six starts with a 0.59 ERA. He tossed a complete game shutout against the Atlanta Braves on May 7 and followed that up with two consecutive scoreless outings. He enjoyed a 32-inning scoreless streak that month.

He maintained great form through July, and after shutting down the Diamondbacks for seven innings on Aug. 11, Ryu’s ERA reached a season-low 1.45, an absurd number that late in a season of a record-breaking home run explosion in the majors.

But with the hype train for Ryu’s first Cy Young Award at full speed, the left-hander ran into trouble. Over his next four starts, Ryu was roughed up for 21 earned runs in 19 innings. His ERA ballooned to 2.45.

With the Cy Young likely out of reach, Ryu skipped a turn in the rotation earlier this month to work on his mechanics and finished the regular season with three consecutive quality starts.

He shut down the Mets for seven innings of two-hit ball on Sept. 14 and held the Colorado Rockies to three runs in seven innings last Sunday. And he capped off the year with seven more shutout innings against the Giants.

Ryu held the opponents to three runs over his last 21 innings, while striking out 21 and walking none.

Taking the ERA title may not be enough to make Ryu the first Asian-born pitcher to win the Cy Young, as deGrom also had an impressive finish to the season and ranks ahead of Ryu in several standard and advanced statistical categories other than wins and ERA.

DeGrom gave up one run over his final 28 innings with 35 strikeouts and two walks. With one day of regular season left, deGrom sits atop the NL with 255 strikeouts and 0.97 walks and hits per innings pitched (WHIP).

Aside from individual glory, one thing Ryu has going for him that deGrom doesn’t is that he will pitch in the postseason.

The Washington Nationals have locked down one wild card, meanwhile, the Milwaukee Brewers, prior to Saturday’s games, were holding down the second wild card spot while also trailing the St. Louis Cardinals for the NL Central title by just one game.

Ryu faced the Cardinals once and lasted just 1 2/3 innings on April 8 before leaving with a groin injury. He was charged with two earned runs in that outing.