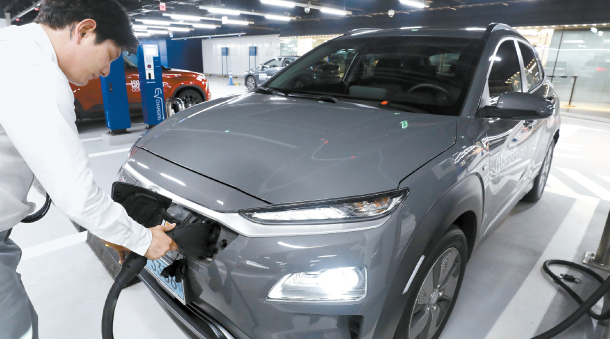 There’s no love lost between LG Chem and SK Innovation.

The two electric vehicle (EV) battery makers have gone to war in courts on both sides of the Pacific Ocean over the last few months, accusing each other of everything from stealing trade secrets to breaching patents and undermining the “national interest.”

Despite the ongoing lawsuits, the jury is still out on who is actually in the right. So far, both companies have proven that they have enough grievances with each other to throw together a countersuit in response to every claim made. But not a single accusation has been proven by either company yet, and it seems likely that the spat will continue for the foreseeable future.

Here are the basics on the ongoing feud, how it began and the accusations that have already been made.

Q. LG Chem and SK Innovation are embroiled in a huge fight at the moment - what’s that about?

LG Chem has accused SK Innovation of stealing confidential technology secrets for rechargeable electric vehicle (EV) batteries by hiring former LG employees and asking them to share information about their work during the application process.

In response, SK Innovation says it did not break any laws and has countersued LG Chem and LG Electronics, claiming they infringed on SK Innovation patents.

Both lawsuits - LG’s filed in the United States and SK’s filed in Korea - are ongoing.

The dispute comes at a time when the global market for EV batteries is just starting to boom as carmakers like Volkswagen sign massive supply deals in preparation for the upcoming EV era. Korea, China and Japan are all strong players in the burgeoning industry. Future Market Insights expects the EV lithium-ion battery market to generate over $23 billion in annual revenue by 2027.

Among Korean EV battery makers, LG Chem ranks first by shipments, while SK Innovation is third. During the year’s first half, LG was the world’s fourth-largest EV battery supplier and SK was eighth, according to SNE Research. Samsung SDI is another strong player, ranked second domestically and fifth globally, but its EV battery cells use a different technology to that adopted by both LG and SK.

Q. Let’s go back to that original accusation. Exactly what did LG Chem accuse SK Innovation of doing?

LG had two issues - that SK deliberately tried to recruit excessively large numbers of LG employees, and that SK illegally obtained confidential information in the recruiting process by asking applicants to write or talk about specific projects in excessive detail.

LG says it contacted SK to complain in 2017 and again early this year, but both complaints were ignored and, LG says, SK continued to recruit its staff.

According to LG, more than 100 of its former employees have moved to SK since 2017. At the same time, SK Innovation’s EV battery supply contracts shot up more than 14 times over. LG Chem is an early pioneer in the EV battery industry, having started mass production in the 1990s, and holds 14 times the number of patents SK Innovation, a relative newcomer, does, it says.

LG does not think SK’s recent success is a coincidence.

The real fighting started in April this year, when LG Chem reported SK Innovation to the U.S. International Trade Commission (ITC) and filed a lawsuit in the U.S. District Court in Delaware, alleging that SK stole trade secrets on the development and manufacturing of pouch-type lithium-ion batteries.

In late May, the ITC began an investigation into the complaint. The final ruling is expected to come out in October next year.

Q. Why did they make the accusation in the United States?

ITC investigations are known to be fast. Upon receiving a complaint, the ITC decides within a month whether the case is worthy of investigation or not. The entire process takes roughly 16 months. Lawsuits submitted in court, on the other hand, can take as long as three years.

“One reason plaintiffs are drawn to file intellectual property cases in the ITC is because ITC cases are fast and impose a lot of work on defendants very quickly,” said Joshua Landau, an attorney and patent counsel for the U.S. Computer & Communications Industry Association. “Combined with the threat of exclusion, an ITC case imposes a lot of risk and cost, and therefore a lot of settlement pressure, on a defendant.”

The ITC also has a prompt “discovery” procedure that requests the defendant to submit responses in 10 days - which LG believed would make it harder for SK to conceal evidence. In lawsuits, the due date for the same process would be 30 days.

From LG’s perspective, another core advantage is that the ITC can stop imports of SK’s EV batteries to the United States - one of the largest EV battery markets in the world - if it concludes SK did steal trade secrets. In that case, SK can also be stopped from bringing factory equipment to its Georgia EV battery plant, which was completed earlier this year and is now being outfitted, to supply batteries for Volkswagen. 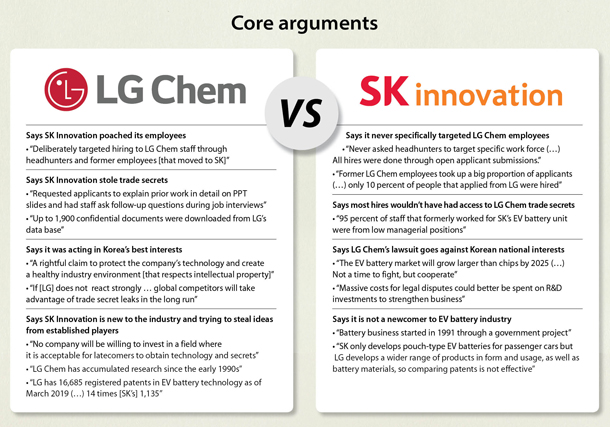 Q. Is there any conclusive evidence to prove LG Chem’s case that we’re aware of?

At the moment, we only have LG’s side of the story and investigations are still underway. LG claims that SK asked job applicants from LG Chem to share specific details about their projects on paper and during job interviews.

“Upon perceiving [SK’s] blatant request for business secrets,” candidates submitted details and photos related to LG’s battery technology and in the process downloaded and printed up to 1,900 confidential documents, LG says. The company argues the job interviews were part of SK’s effort to steal trade secrets.

SK denies everything, arguing that 95 percent of former LG Chem staff that moved to SK were from low-ranking managerial positions that had no access to highly classified information.

On LG’s claim that SK had specifically targeted its employees and hired an excessively large number, SK said it handles simply “too many” applications from LG employees.

LG’s first suit in April was met with cynical responses from some of its own employees. On Blind, an anonymous bulletin board for Korean companies, LG Chem employees uploaded comments saying the company should seriously question why people are leaving in the first place, pointing out that SK offers higher pay and a better welfare package.

Q. If former LG Chem employees are giving away trade secrets, why isn’t LG taking them to court?

Oh it did. According to the company, in May it filed a criminal complaint - we’ll get to the details on that one later -against SK Innovation, SK human resources managers and former LG employees that now work in SK. LG did not disclose the number of people accused.

On the argument that LG is violating former employees’ right to “freedom of occupation,” an LG spokesman said the company fully respects everybody’s rights, but it cannot tolerate confidential information or documents leaking.

Q. Ok so that was all related to the first case. SK Innovation then went on the offensive - what happened?

In June, SK filed a suit against LG Chem in a Korean court, claiming damages and defamation. SK said LG’s claims were groundless and asked for one billion won ($834,240) in damages. It warned that the amount could increase during the legal process, based on the estimated damage LG’s accusations bring to its business.

Q. Why did SK Innovation chose to file its suit in Korea?

SK’s legal response was all about the “national interest.”

From very early on, SK repeatedly said it wants to settle the dispute through talks instead of in the courts. It amped up its patriotic national interest argument in July, when Japan introduced restrictions on exports of high-tech materials to Korea.

SK said it gives Korea a bad image if two of the country’s leading conglomerates are involved in a very public spat on the international stage when they should be working together to increase Korea’s share in the global EV battery market.

But despite the rhetoric, SK’s counterattack didn’t stay inside Korean borders for long.

Yes. On Aug. 30, SK Innovation announced it was suing LG Chem and LG Electronics, the largest affiliate under LG Group, in the United States for infringing EV battery patents.

To be specific, SK reported LG Chem and its U.S. corporation LG Chem Michigan to the ITC and filed lawsuits against LG Chem and LG Electronics in the U.S. federal court in Delaware. LG Electronics was added, SK said, because it used LG Chem’s battery cells in EV battery packs sold to carmakers.

On Sept. 17, police raided SK Innovation’s Seoul headquarters and research center in Daejeon. That afternoon, after the police left SK’s offices, LG Chem released a press release saying it had filed a criminal complaint against SK and its HR managers with the Seoul police in early May, saying SK violated domestic law on the “prevention of divulgence and protection of industrial technology.”

Q. So in summary, that’s now two cases - one in the United States and one in Korea - per company?

No. Last week, LG Chem added another suit against SK Innovation in Delaware, this time saying it violated five patents. It also made another complaint to the ITC.

So in total, LG Chem has two ITC investigation and two lawsuits filed in the U.S. district court in Delaware against SK over theft of trade secrets and patent infringement and a Korean police investigation underway over SK’s alleged violation of domestic law on the protection of industrial technology. That police investigation is the one that also names specific former LG employees and SK human resources managers.

On the other side, SK Innovation has a lawsuit ongoing in Korea claiming damages because of LG’s U.S. case filed in April. It also reported LG Chem and LG Electronics to the ITC and the U.S. federal court in Delaware over patent infringement.

Patents and trade secrets concern inventions or manufacturing processes and can both be protected. Patents offer an exclusive right to stop others from commercial use of something without the owner’s consent. In the application process, patents are disclosed to the public and after a certain period, patents expire which means anybody can use that technology, free of charge.

Whether something is considered a trade secret or not nearly always depends on how well the company who claim ownership argue it in court after they believe it has been stolen. By that point, it’s very hard to put it back in the bottle.

Q. What happens next?

None of the allegations from either side have been legally proven as investigations are still underway. But SK Innovation’s offices were raided twice last week, because local police said the first search had “raised the need to obtain additional documents.”

As for making peace outside of court - the talks that SK has long pushed for - the possibility now looks slim. On Sept. 16, the CEOs from the two companies got together for the first time since the feud started. The meeting itself came after months of arbitration from Industry Ministry officials, but finished without any conclusive results - the two-hour session ended with both “confirming their respective stance.”

The abortive talks came just a day before police raided SK offices - likely the final nail in the coffin for that attempt at playing nice.

“Police investigations don’t stop even if the parties settle - it’s reduced the chance of the two finding a resolution through talks,” said an industry source.