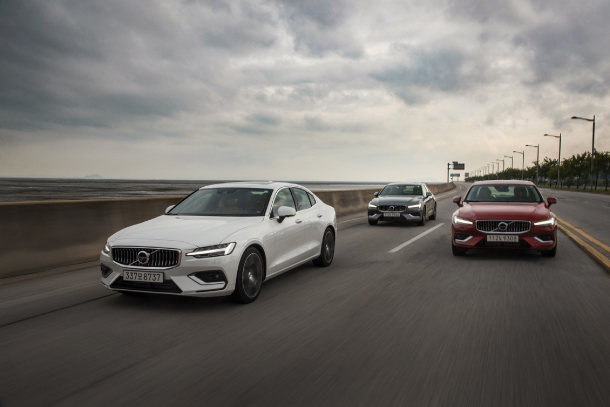 SIHEUNG, GYEONGGI - Volvo Cars Korea thinks it can make a dent in the already saturated SUV and hatchback market with its S60.

That’s a tall order, considering that the competition is from BMW, Mercedes and Genesis.

But I had high hopes for the flagship sedan after learning that the company had received 2,200 preorders for it. Plus, the Korea Automobile Journalists Association picked Volvo’s new car as the car of the month recently.

“We are trying to compete in Korea’s D-segment market,” said Lee Man-shik, sales and marketing director at Volvo Cars Korea. “The new S60 is going to compete against the BMW 3 Series, Mercedes-Benz S-Class and Genesis G70.” 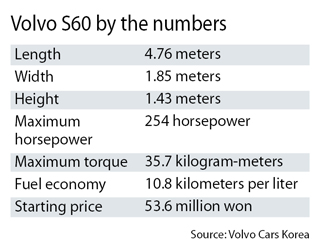 The vehicle does do well enough on the road and follows the design and manufacturing philosophies of the Swedish automaker. The car looks elegant and sporty, loyal to the “Made by Sweden” tradition Volvo has maintained through the years.

Many are aware that Volvo makes outstanding SUVs and wagons, but not many recognize the Swedish automaker as a sedan manufacturer, and S60 offers some hints as to why. The S60 is good, but that’s just about it. The luxury sedan, compared to other foreign models in the similar price range, is not really that superb or significantly ahead of the competition in terms of on-the-road performance.

A solid enough option it definitely is, considering luxurious touches embedded throughout the car, but it’s not clear whether the new model is excellent - at least, based on this reporter’s behind-the-wheel experience during a 50-kilometer (31-mile) drive from Incheon to Siheung, Gyeonggi, earlier this month.

Based on the Coupe Concept from Volvo Cars USA’s top designer T. Jon Mayer, debuted in 2013, the S60 is sleek and refined. Agility is emphasized in the model’s longer but lower exterior compared to its predecessor.

With the dimensional changes, the sporty and dynamic exterior, coupled with sharp accents across the front and the muscular radiator grille, the car reminded this reporter of a young, ambitious lawyer dressed in a suit.

While the S60 is targeted towards affluent Koreans in their 30s and 40s, precisely for its sharper and younger looking design, the model could also appeal to younger buyers, if they can afford it. The car is priced at 53.6 million ($44,700), coming with a five-year or 100,000 kilometer warranty.

Volvo said its new S60 has a unique Swedish vibe on the inside, and the carmaker wasn’t lying. Leather seats blend seamlessly into the lime dark matte wood dash panel. The seats are comfortable and the leg room good.

The air vents are gorgeous.

But that appreciation and awe failed to hold after I put the gear to drive and rolled onto the road. Contrary to Volvo’s argument, the car wasn’t so sporty. Performance was average.

I would not describe it as dynamic.

With its T5 turbocharger gasoline engine, the S60 is rated at 254 horsepower and 35.7 kilogram-meters in torque, which are strong numbers for any car out on the market. But the car never lived up to those numbers, cruising well tamed.

The sportiness Volvo claimed was only slightly evident when I put the driving mode to “dynamic.” The engine then roared louder and the car accelerated faster. It connected better with the driver. But that still wasn’t enough for me, as I was expecting an authentic sporty sedan.

If Volvo advertised the car as a comfortable luxury car rather than a sports sedan, I probably would have appreciated the S60 more. But that was not the case, and I was never too excited and never felt any adrenaline rush while driving.

The car does have high-tech safety features, but there’s not much to say about those, because in today’s auto market, every carmaker is expected to have them on their new cars.

Yet its adaptive cruise control system, along with a lane-keeping aid, worked especially well during the test drive event on a road full of large-sized trucks.

The Bowers & Wilkins high-end speaker system was also a plus. With 15 speakers, it delivered studio-quality sound.

But playing that music through the counterintuitive infotainment system, with a 12.3-inch digital display, wasn’t so much fun. Navigating the test drive route with the digital map, packed with confusing elements, was already challenging, and scrolling through menus and locating the music playing interface took that frustration to another level.

The sense of calm I achieved in the comfortable albeit not-so-sporty vehicle vanished when I started messing around with the infotainment system.

It’s safe to say that Volvo S60 is a solid, price-efficient model offering luxury and comfort. But it doesn’t really live up to the marketing.

And if you buy one of these vehicles, you might want to upgrade your phone instead of using the infotainment system.