Actor Park Jung-min has appeared in two films that were released this year, and he recently wrapped up shooting another film. [NEWS1]

Actor Park Jung-min was a budding actor when he won the Rookie of the Year award at the Baeksang Arts Awards three years ago.

Just three years later, the 32-year-old actor is the star of “Tazza: One Eyed Jack,” one of the most successful film franchises in the country. He has come a long way from his debut in the independent film “Bleak Night” back in 2011. But the actor doesn’t seem to have changed much.

He showed up for the interview wearing a navy hoodie, just as he did three years ago when he had his first interview with Ilgan Sports, an affiliate of the Korea JoongAng Daily, after receiving the Rookie of the Year award for his role in “Dongju: The Portrait of a Poet” (2015).

In his previous interview, Park said he wanted to be a good actor, and today he is still pushing to prove himself and do better on the set.

Park talked about his recent film “Tazza: One Eyed Jack,” in which he plays the role of Do Il-chul. He is an ordinary student who spends much of his time at a cram school during the day, dreaming of landing a stable job. But, at night he dominates casinos with his natural-born talent for swindling. Eventually, Do bets his life on gambling. 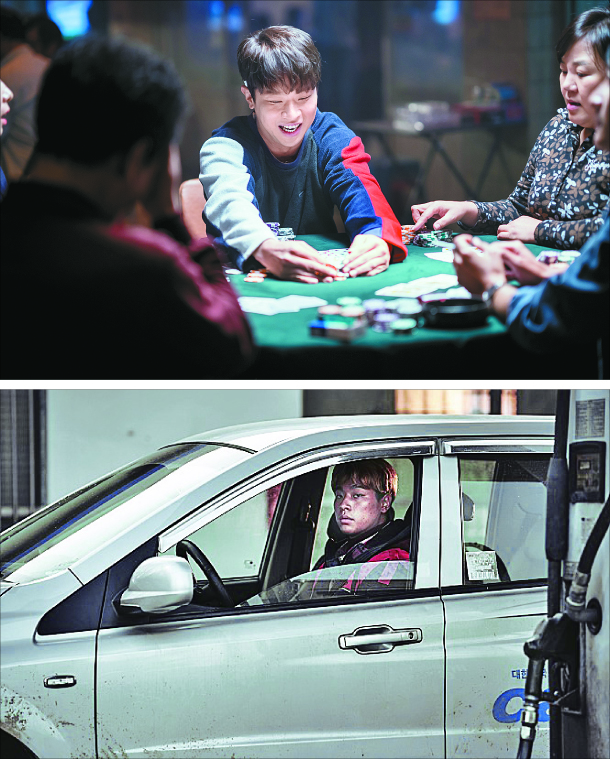 In “Tazza: One Eyed Jack,” Park, top, plays Do Il-chul, a student who becomes addicted to gambling. Park appeared in the mystery thriller “Svaha: The Sixth Finger,” above, earlier this year. He played a mysterious repairman. [LOTTE ENTERTAINMENT, CJ ENTERTAINMENT]

Q. What was it like to work with director Kwon Oh-kwang, who previously directed the independent film “Collective Invention”?

A. I’m a fan of him from “Collective Invention.” “Tazza: One Eyed Jack” has all the elements you can find in commercial films, but people who made it are close to minorities. Because of that, many people wanted to check it out. One thing I can say for sure is that I gave my all when I worked on it.

It has been reported that you have shed about 20 kilograms (44 pounds) for the role.

This is my average weight. I’m small with few muscles, but I gained a lot of weight before I began shooting for “Tazza.” I didn’t intend to look handsome on the screen, but I just wanted to show my character well. He is a student preparing for a test, but he is also into gambling. I wanted to show how he becomes devastated and lifeless because he becomes addicted to gambling.

How did you want to play Il-chul? He represents many young adults out there stuck in cram schools studying to pass the government recruitment exams.

I have a lot of friends who used to prepare for those tests. They are ordinary people. I wanted to show what an ordinary person can turn into when he is hooked on gambling. I look very common [for an actor] so maybe that’s why the director cast me for the role.

You’ve come a long way, and now you have a solid footing in the film industry. How does that feel?

I take on bigger roles and do a lot more work compared to the past, but I ask often myself ‘Why am I doing a lot of work?’ and I can’t answer that question. I feel flattered when I see that many people like my works, but I really don’t know why people want to work with me. Because of this, I try harder to prove myself. I’m stressed out a lot, though. I feel like [popularity] is an optical illusion. You never know what will happen next. But [actor] Kwon Hae-hyo once told me that I don’t have to prove myself because people brought me here after they saw my previous work. He told me I shouldn’t waste my time proving myself. It’s not easy, but I will try not to do that.

Do you enjoy where you’re at now?

I feel nervous. I can’t trust myself. I know myself well, and I’m well aware of my limits and capacities.

Do you feel burdened as the hero of the third part of the “Tazza” series?

I was under a lot of pressure. I really hope to see the fourth ‘Tazza’ in the future. In the original comics, there are two protagonists, so I think there is a chance of having another film.

Tell us about the bookstore you have recently opened.

Sometimes, I work at the bookstore when I don’t have to be on set. But my childhood friend is the one who’s in charge of managing the store on a day-to-day basis.

You’ve recently extended your contract with your current management company instead of finding a new place. Why is that?

I never thought of moving to another agency. If I do that, I have to start from the beginning. There, I have [actor] Hwang Jung-min, too. I owe a lot to him. He’s given me a lot of support. I think I have to return his love.