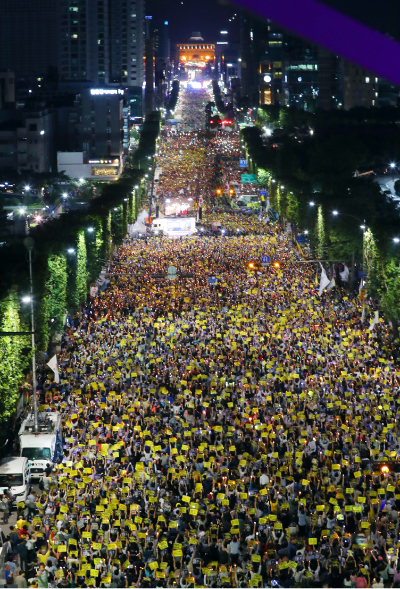 A large crowd stages a candlelight vigil in the streets of southern Seoul on Saturday evening as they express their support for Justice Minister Cho Kuk and the Moon Jae-in administration’s reform of the state prosecution agency. [NEWS1]

A sea of candles burned bright in the streets of southern Seoul on Saturday evening during a rally to express support for Justice Minister Cho Kuk and the Moon Jae-in administration’s reform of the state prosecution agency.

The rally contrasts the ongoing public demonstrations by those on the other side and lays bare deepening political divisions in Korean society about the prosecutorial probe of Cho and his family and its impact on the judicial reform process.

According to organizers of the pro-Cho rally, somewhere between 1.5 million to 2.5 million people took part, which mainly occupied 1.6 kilometers (1 mile) of the wide boulevard leading from the Seocho subway station to the Supreme Prosecutors’ Office (SPO) in southern Seoul.

Police did not reveal their official head count for the event.

With a candle or cellphone in one hand and a yellow placard that read “Defend Cho Kuk” or “Reform the prosecution” in the other, participants joined in with chants protesting the prosecution’s unprecedented probe into the justice minister.

One speaker said the investigation - which included a raid on Cho’s family home, interrogations of his children and alleged leaks of information to the press - proved the agency was politically motivated to derail Cho and the administration’s judicial reform plans to curb its powers.

The voluntary mobilization of such a massive crowd, which slowly built up from an estimated 600,000 at the beginning of the event around 6 p.m. to well over a million by the time it dispersed around 10 p.m., was reminiscent of the massive candlelight rallies that overtook the country in late 2016 to 2017 and ultimately led to the impeachment and ouster of former President Park Geun-hye.

Saturday’s rally was the seventh of its kind held to protest the prosecution’s investigation into Cho that even surprised the event’s own organizers who apparently did not expect such support. All eight lanes of the Seocho boulevard were blocked off from traffic as a result of the crowd, which also occupied a large portion of an intersecting street that separates the SPO from the nearby Supreme Court building.

In response to this apparent momentum in public opinion against the agency, Prosecutor General Yoon Seok-youl told reporters via text message on Sunday that he remained firmly committed to “the realization of prosecutorial reform” in line with “the people’s will and the National Assembly’s decision.”

On the other side of the SPO building on Saturday afternoon, right-wing groups staged their own rally in support of the prosecution, calling for Cho’s dismissal as justice minister. Some 1,000 people took part in this event, according to organizers. In line with a series of conservative rallies throughout weeks prior, many participants called for Cho’s detention and even the impeachment of President Moon Jae-in.

Police deployed a total of 61 riot police units numbering at around 3,200 officers at the gates of the SPO and the nearby Supreme Court building in the event participants of the two rallies clashed. But there were no reports of any scuffles or injuries.

The ruling Democratic Party (DP), which had been facing an ever-mounting dilemma over the public outcry regarding the Cho scandal, was visibly elated by the show of public support for the justice minister, with many of its lawmakers taking part in Saturday’s pro-Cho rally themselves.

“The people’s will was decisive and clear,” said the DP’s floor leader, Rep. Lee In-young, on Sunday. Lee added the event showed the people were the sole owners of prosecutorial power and that reform was an inevitability that neither the agency nor politicians could stop.

Rep. Lee Jong-kul, a five-term DP lawmaker, even argued during the rally that Prosecutor General Yoon should step down from his position - the first time a sitting ruling party legislator made such a demand.

The main opposition Liberty Korea Party (LKP), which has led the campaign to oust Cho, downplayed the importance of the Seocho rally, dismissing organizers’ claims that a million people partook in the event.

In a press conference on Sunday, LKP Rep. Park Sung-joong claimed the actual number was, at maximum, between 33,000 and 50,000, given that a million people could not fit into the boulevard between Seocho station and the SPO.

The LKP staged its own rallies on Saturday in various places across the country in protest against Cho, with its Chairman Hwang Kyo-ahn in Daegu and floor leader Rep. Na Kyung-won in Changwon.

On Thursday, the party is set to hold its biggest rally at Gwanghwamun Square in central Seoul, where almost the entirety of the conservative political establishment is scheduled to make an appearance to condemn the Moon administration.

With politicians, activists and supporters on both the left and right taking to the streets in protest in recent weeks, the political rift over the Cho Kuk scandal and the prosecution’s probe is deepening the division in Korean society.

Polls, however, indicate mixed results as to the public’s true sentiment about the investigation.

A KBS commissioned poll conducted by Hankook Research from Thursday to Friday showed 49 percent of the public found the prosecutorial probe into the Cho family “not excessive,” while 41 percent saw it as “excessive.” A Realmeter poll commissioned by OhmyNews from last Wednesday had the opposite result, with 49.1 percent of respondents labelling the probe “excessive” and 42.7 percent seeing it as “appropriate.”

Moon’s approval rating also took a tumble after his appointment of Cho, then recovered somewhat as the probe deepened with unparalleled intensity in recent days.

For the foreseeable future, the Cho Kuk issue is likely to paralyze legislative politics as the National Assembly gears up to hold parliamentary audits on government agencies throughout October. With the opposition expected to mount another round of fierce attacks on the justice minister and the ruling party a staunch defense, the political stakes for both sides continue to swell as the clock ticks down to the next parliamentary elections in April.