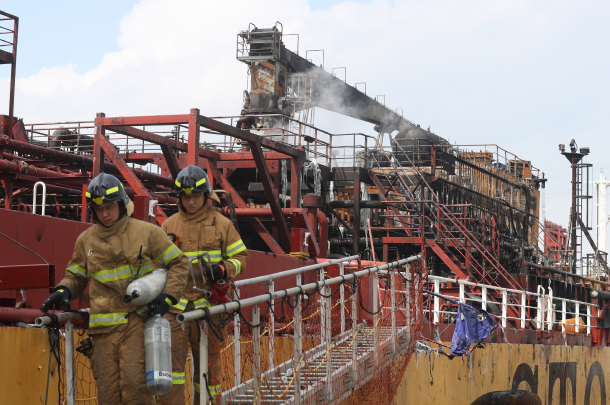 Smoke is still rising Sunday following fires on two vessels in Ulsan that were ablaze for more than 18 hours. An explosion started the fire on one ship which spread to the vessel next to it, injuring 18 people. [YONHAP]

Fires on two vessels in Ulsan were put out on Sunday after being ablaze for 18 hours, following an explosion. At least 18 people were reported injured.

The explosion took place around 10:50 a.m. Saturday on the 25,603-ton Cayman Islands-flagged vessel that was transporting petroleum products, named Stolt Groenland. The vessel was docked at Yeompo Port in Dong District, Ulsan, at the time.

Twenty-five sailors were on board Stolt Groenland, of whom 10 were Russians and 15 were Filipinos.

The fire then spread to Bow Dalian, a 6,500-ton Singaporean vessel, docked next to the Stolt Groenland, carrying 21 people including Korean and foreign workers and sailors, according to authorities.

The workers and sailors on both vessels were preparing to move some 1,000 tons of petroleum products from Stolt Groenland to Bow Dalian when the explosion took place.

“We still do not know why the explosion took place, other than that there was a spark for an unknown reason that led to the explosion and fire,” an official of the Ulsan Fire Department told the JoongAng Ilbo. “The fire department and maritime police will work together to find out the cause of explosion.”

Although all sailors and workers on both vessels were rescued, a total of 18 people were injured in the process of putting out the fire.

As of Sunday morning, 12 of the injured had been given the all clear after receiving medical treatment on-site or at a hospital nearby. The six who were still hospitalized as of Sunday were one maritime police officer, one Indian sailor and four Korean workers. One of the Korean workers was reported to be severely injured, having sustained third-degree burns.

“The Korean worker has third-degree burns on his arms and legs,” an official of the emergency response department of the Ulsan city government told the JoongAng Ilbo.

The Ulsan city government installed an underwater fence around the Stolt Groenland to prevent the petroleum products on board from leaking to the sea.

“We have not found any signs of leaking as of now,” Baek Seung-hee, head of the maritime shipping department of the Ulsan city government, told the JoongAng Ilbo Sunday morning. “We will continue to monitor the site and will respond if we find any sign of leaking.”

The city government also closed Ulsan Bridge from traffic, located just around 300 meters (984 feet) from the vessel, for a few hours on Saturday afternoon. Authorities opened the bridge temporarily from 6 p.m. to 11:30 p.m. Saturday, before closing it off for a safety check. It re-opened the bridge to traffic from noon Sunday.

According to some local media reports, the Stolt Groenland was carrying materials such as styrene monomer, methyl methacrylate and ethylene dichloride, which can have devastating effects on humans if inhaled. Some of these materials were released into the air at the time of the explosion and fire, media reported. It was unclear Sunday if and how much the workers and firefighters injured were affected by the toxic gas.