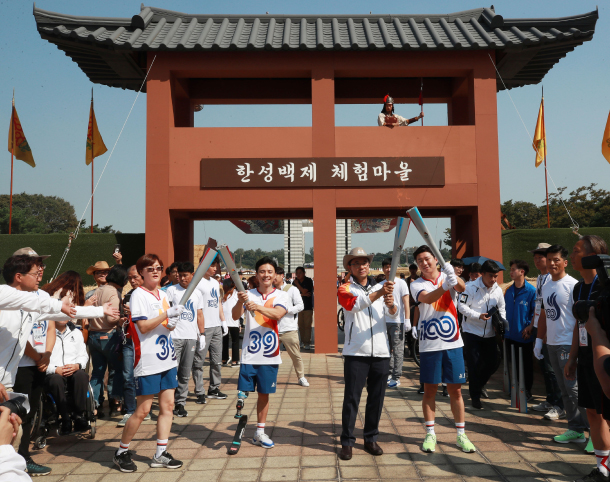 Participants of the torch relay for the 100th National Sports Festival and the 39th National Para Games wish for the successful launching of the festival, set to begin on Friday, at the Olympic Park in Songpa District, southern Seoul, on Sunday. Torch relay runners included, from left, Lim Chun-ae, the former track and field athlete who won the 800-meter, 1500-meter and 3000-meter races at the 1986 Asian Games in Seoul; Jung Seung-hwan, a member of the national para ice hockey team of Korea; Joo Yong-tae, head of the tourism and sports bureau at the Seoul Metropolitan Government; and Jin Jong-oh, a gold medalist in Olympic pistol shooting. The National Sports Festival, an annual event in Korea since 1920 hosted by a different city every year, is being held in Seoul this year. [YONHAP]