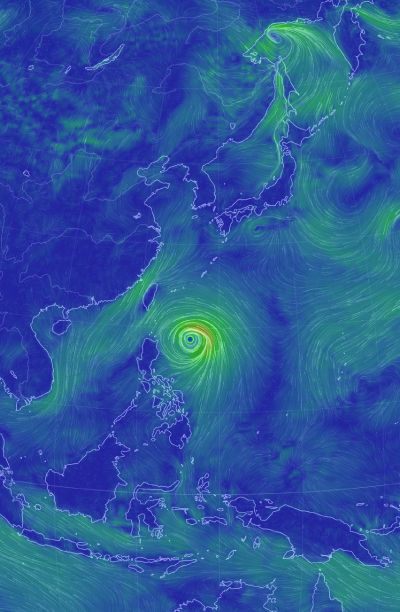 A satellite image of Typhoon Mitag that is expected to land in the southern coast of Korea around Wednesday. [NEWS1]

Typhoon Mitag, expected to be as strong as the recent Typhoon Tapah, may land in the southern coastal area of Korea around Wednesday, said the Korea Meteorological Administration (KMA).

The typhoon, which formed in the Philippine Sea on Saturday, was moving north toward Taiwan on Sunday morning, traveling at a speed of 18 kilometers per hour (11.2 miles per hour) with a maximum wind speed of 27 meters per second (60 miles per hour), according to the KMA on Sunday.

By the time the typhoon lands in Korea, it is expected to have a maximum wind speed of 35 meters per second.

Typhoon Tapah, which left at least 26 people injured and displaced 19 people from their homes in Korea, had a maximum wind speed of 35 meters per second when it passed over the Korean Peninsula from Sept. 22 to 23.

Given that Tapah made such an impact without landing in Korea, Mitag may inflict more damage if it continues on its expected course.

“There is room for uncertainty about the course that Typhoon Mitag will take,” said Yoon Gi-han, a weather analyst at the KMA. “We will be able to tell more from Monday when we have more data on the direction of the typhoon.”

Mitag is expected to move beyond the Korean Peninsula from Thursday afternoon, into the East Sea and toward Japan, with a reduced maximum wind speed of 27 meters per second.

Mitag will be the 18th typhoon formed this year and may be the seventh typhoon to have a direct impact on Korea.

The last time Korea was hit by as many as seven typhoons in a year, a record number, was in 1959.