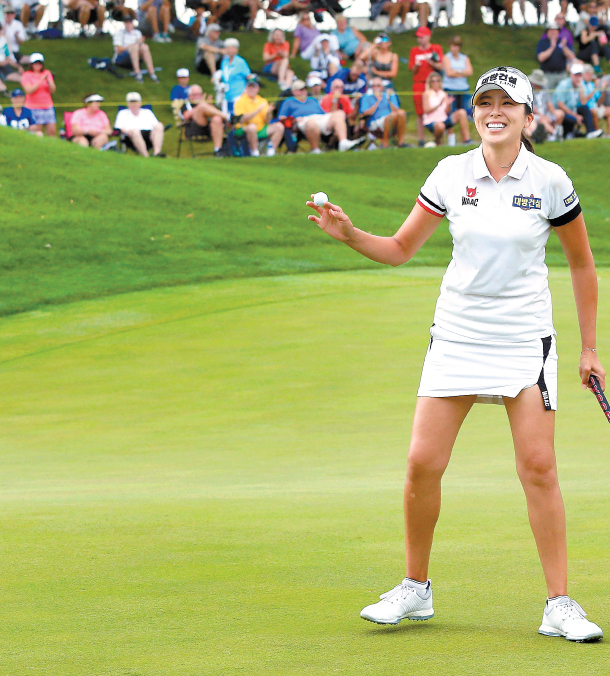 Hur Mi-jung picked up her second win of the season with a wire-to-wire victory at the Indy Women in Tech Championship Driven By Group 1001 at Brickyard Crossing Golf Club in Indianapolis, Ind. on Sunday.

Hur, who started the final round two shots ahead of the field, quickly extended her lead in the first nine holes by adding birdies on the par-4 fourth and par-4 ninth. Then, she continued her streak as she started the second half of the round with a birdie on the par-5 10th. With another birdie on the par-4 13th, Hur once again extended her lead. By finishing the rest of her round with pars, she cruised through to her fifth win on the LPGA Tour.

Despite rain on the final day, Hur shot a bogey-free round of four under par, 68, to finish the tournament at 21 under par, 267, four shots ahead of the runner-up Nanna Koerstz Madsen of Denmark.

This win is quite an achievement for Hur as this was the first time ever that she has picked up a wire-to-wire victory.

“After the third round, I was talking about that wire-to-wire because I never had that before in my life and I really wanted to do it,” Hur said. “And I did it. I’m so happy.”

With the win, Hur took home the prize money of $300,000 and has moved up to 10th in the Race to the CME Globe standing. Her second win of the season also allowed Hur to become only the sixth player on the LPGA Tour this year to win multiple tournaments.

“I’m just trying to enjoy my golf game for [the] whole year and working really well,” Hur said after the round. “Not too much stress from my game. I’m so happy.”

Hur joined the LPGA Tour in 2009 and picked up her first win in her rookie season at the Safeway Classic. Following that first win, it took until September 2014 for Hur to pick up her second, at the Yokohama Tire LPGA Classic.

Having once again spent the next four seasons without a win, this year, Hur finally picked up her third at the Aberdeen Standard Investment Ladies Scottish Open in August. Before that, Hur’s best finish this year was tied for sixth at the Walmart NW Arkansas Championship presented by P&G in June.

Following her third career victory on the LPGA Tour, Hur didn’t wait another four or five years. Not only did she pick up her first-ever wire-to-wire victory, this was also the first time she has won two tournaments in a single season.

This season, Hur’s been one of the most consistent players on the LPGA Tour as she’s only missed two cuts out of the 17 tournaments she competed in. Also, she’s had three top-10 finishes.

Behind her success, Hur credited her husband. After she got married in January last year, Hur finally ended her five-year winless drought - in fact, she’s having the best season of her career.

“Had two wins this year with my husband already - first one was in Scotland and this one,” Hur was quoted as saying on LPGA.com. “Hopefully, he is traveling more with me. There would be another good memory I can make.”

Although the season is fast approaching the end, Hur hopes to see her third win, something she’s never achieved before. But instead of focusing on that, Hur said she’ll continue to enjoy the game and wait for her chances.

“I look forward to [playing],” Hur said. “I’ll just enjoy it and there’ll be another good chance coming.”

Defending champion Park Sung-hyun wasn’t able to continue her success this year as she missed the cut after the first two rounds.

The LPGA Tour will continue its season at the Volunteers of America Classic, starting from Thursday to Oct. 6, at the Old American Golf Club at The Colony in Texas.

Following the tournament in Texas, the Tour will start its Asian Swing, starting with Buick LPGA Shanghai from Oct. 17 to 20. There will be four straight LPGA Tour events in Asia this year, in China, Korea, Taiwan and Japan.

After the four tournaments in Asia, the Tour will head back to Florida for the final tournament of the year, the CME Group Tour Championship.