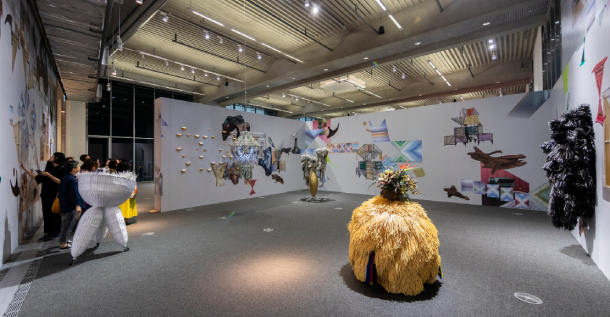 “The Intermediate-Ikebana Dragon Ball” (2016) by Haegue Yang is on display at the ongoing “Homo Faber: Craft in Contemporary Sculpture” exhibit in Gwangju. [ASIA CULTURE CENTER]

GWANGJU - Whether it’s carefully balancing a pile of stones or making garments out of animal skin, handcrafts are an inseparable part of human history.

A new exhibition at the Asia Culture Center (ACC) in Gwangju even goes so far as to call humans homo faber, Latin for “Man the Maker.” “Homo Faber: Craft in Contemporary Sculpture” features contemporary sculptures and crafts made from a variety of materials, ranging from paper and porcelain to wood and wool. Participating artists hail from all over the world and include Thomas Schutte from Germany and Haegue Yang of Korea.

The theme for the exhibition was chosen to fill a void of contemporary sculpture exhibitions in Korea, according to art director Kim Sung-won.

While offering a sweeping overview of some of the most recognized sculptors and their works today, the exhibition focuses on sculptures that have sociopolitical messages, which vary with the artists’ background and identities.

Vietnamese artist Bui Cong Khanh, for example, incorporates imagery associated with the Vietnam War, such as rifles and grenades, into his wooden furniture pieces, as seen in “The Wound Has Not Healed” (2018). Beijing-based Liu Wei’s interest in the instability and fluctuation of 21st century China is evident in “Big Dog” (2010-2017), a towering jumble of collapsing buildings made with oxhide dog chews.

Rosemarie Trockel, born in 1952 Germany, challenges narrow gender roles and social norms by incorporating items associated with the household. Works on display include “Ma Fenetre” (2005), or “My Window,” a presentation of two hot plates, and a blue wool knit painting titled “Till the Cows Come Home” (2016).

Works like Trockel’s and other feminist art adopt “techniques and mediums which were previously denounced as being of the female gender, such as knitting, knotting, weaving and sewing,” according to Kim.

“Now, craft goes beyond a simple technique or ornamentation, but stands for feminists, minorities, the marginalized, labor, tradition and regional-specificity, and calls for a social and political context,” Kim added.