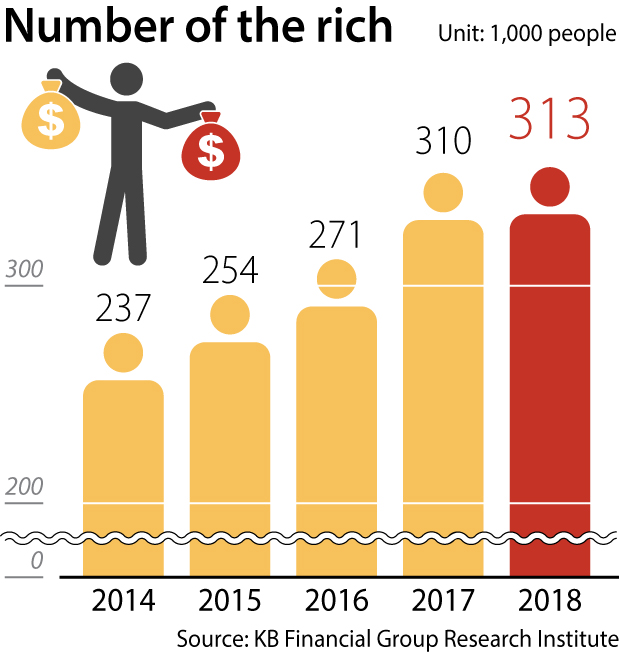 The total number of high net worth individuals, with personal fortunes of more than 1 billion won ($834,738), increased 4.4 percent to 323,000 from a year ago, according to the Korea Wealth Report released by a think tank under KB Financial Group.

The growth represents a sharp slowdown from the 14.4 percent rise in 2017, and it was the slowest rise in five years.

The combined financial fortunes of high net worth individuals fell by 1.7 percent to 2,017 trillion won in 2018.

In Seoul, the southern districts of Gangnam, Seocho and Songpa lead, with 46.4 percent of the rich.

The statistics reflect the trend in which Korea’s wealthy are concentrated in certain regions of the country.

Looking into the assets of the rich, more people favored real estate over financial holdings, such as stocks and other investment instruments.

Financial assets were 39.9 percent of the assets of the rich, down 2.4 percentage points compared to 2018.

Property asset has gradually increased as a percentage of the total since 2015, totaling 53.7 percent this year. Real estate was 53.3 percent in 2018.

“The portion of real estate assets stayed in the 50 percent range, but financial assets dipped below the 40 percent level this year,” the report noted. “The trend is attributed to the surging prices of apartments in prime regions and the declining value of stocks.”

The report also found that the richer they are, the higher the proportion of real estate in their portfolios.

A total of 59 percent of the rich said that they are interested in investing in overseas real estate, and 57 percent of those picked Vietnam as a preferred region for investment.