Lotte Mart branch in Indonesia, right, and SSG.com’s distribution center in Gimpo, Gyeonggi. Lotte and Emart have been focusing on overseas expansion and online, respectively, to survive in the struggling retail industry. [LOTTE SHOPPING, SSG.COM]

As Korea retailers struggle in a challenging market, two major players have chosen very different paths: one is going big online, while the other is looking for greener pastures overseas.

Emart is choosing the former, making a beeline for the internet in hopes of drawing younger consumers. Lotte Mart, the Lotte Group company already big overseas, is continuing its international push in the search for growth.

Emart started offering the early morning delivery of fresh produce through SSG.com, Shinsegae Group’s online marketplace, starting in June, while Lotte Mart opened a hundred stores in Indonesia over the past four years.

The retailers are making aggressive moves as business weakens at home amid the winner-takes-all strategies being employed by new entrants, Coupang and Market Kurly. The e-commerce players have been suffering huge losses to build market share, forcing the traditional players to rethink their priorities.

Lotte Mart in the second quarter reported 33.9 billion won ($30 million) in operating losses. Its loss in Korea hit 50 billion won during the same period. Lotte Mart, however, enjoyed 16 billion won in operating profit from its business abroad. Its performance is particularly good in Indonesia, where it operates 46 stores, and in Vietnam, where it runs 14 stores.

“Global stores will be the key to overcoming the risk,” said a spokesperson from Lotte Mart. 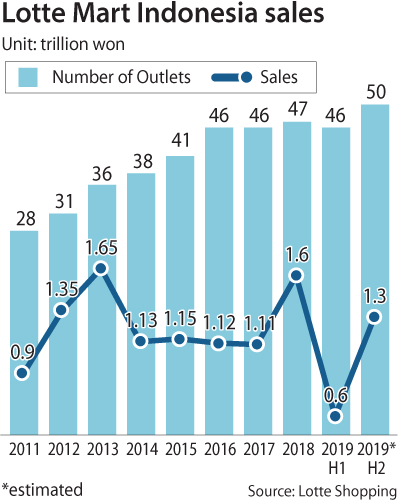 In addition to intense competition in the home market, Lotte Mart is suffering from the sluggish economy and the recent backlash against Japan over its export restrictions against Korea. Although Lotte argues it is a Korean conglomerate, Japan’s Lotte Holdings has a high level of ownership in the Korean operating companies.

Its expectations are high. Indonesia has the fourth-largest population in the world, with 260 million people. The retail market in Indonesia is the largest in Southeast Asia, with an estimated $324 billion in annual sales.

Lotte Mart entered the market in 2008 and currently operates 46 stores in the country. Its sales there in the first half of the year stood at 596 billion won, accounting for 18.7 percent of Lotte Mart’s total sales.

Lotte Mart is continuously expanding its business infrastructure in Indonesia. If it expands in smaller cities in Indonesia, Lotte Mart expects it could gain a competitive advantage in the online-to-offline business model, the company believes.

“Lotte Mart’s strategy in Indonesia could help the company build an infrastructure even when the business shifts to the online business model,” said Lee Hak-jae from Lotte Mart’s overseas development division. “Our goal is to expand to 100 stores in Indonesia by 2023 and reach 2 trillion won in sales in the country.”

In March, Emart spun off its Emart Mall and Shinsegae Mall from Emart and Shinsegae to establish SSG.com. Its ambition this year was developing its early morning delivery. With the distribution centers and its distribution system established in Gimpo, Gyeonggi, SSG.com handles some 5,000 packages per day.

If the company opens an additional distribution center at the end of this year, SSG.com is expected to handle 80,000 packages per day.

SSG.com plans to operate a total of 11 distribution centers over the next five years.

“To raise the competitiveness of our online business, retailers could distribute products from their rival companies,” said a spokesperson from SSG.com.