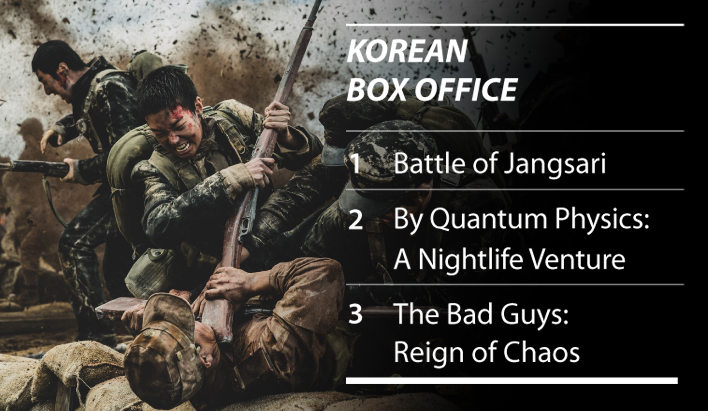 While domestic films dominated the local box office over the weekend, overall ticket sales continued to be flat for the second weekend as many chose to skip the movie theater in favor of other activities.

“Battle of Jangsari” took the first spot, selling 485,000 tickets at a total of 1,090 screenings. The war film is based on a real battle that took place a day before the famous Battle of Incheon. A total of 772 teenage soldiers fought in the battle as a human shield to divert the North’s attention from the Incheon operation. The film details how the young soldiers’ experience was far different from many other soldiers fighting across the country.

Crime action film “By Quantum Physics: A Nightlife Venture” debuted in second place for the weekend as 276,0000 tickets were sold for showings at 799 screens. The story centers around a club owner named Chan-woo who firmly believes that clubs should be run without any illegal activities. When he finds out about a drug party involving a famous celebrity, he immediately shares the information with a police detective. However, he soon realizes that this is no mere drug party but a drug cartel involving influential politicians and even prosecutors. In order to ensure his own survival, Chan-woo must take on the corrupted forces himself and bring the case to light.

“The Bad Guys: Reign of Chaos” dropped to third place over the weekend, selling 259,000 tickets at a total of 1,000 screens. Although box office sales have been slow, the film was the only movie out of three local releases to turn out a profit over the Chuseok holiday season. Overall, the film has sold over 4.4 million tickets in three weeks. 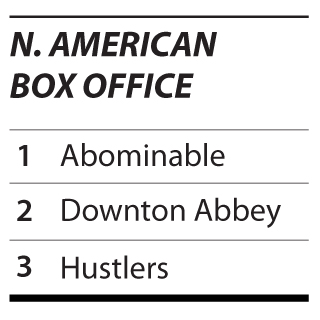 “Once Upon A Time… in Hollywood” sold 123,000 admissions at 678 screens and landed in fourth place during its first weekend in Korean theaters. Starring actors Leonardo DiCaprio and Brad Pitt, the film was director Quentin Tarantino’s latest to compete for the Palme d’Or prize at this year’s Cannes Film Festival.

Set in the late 1960s, fading Hollywood star Rick Dalton (DiCaprio) struggles to find work with his stunt double/manager, Cliff Booth (Pitt). Dalton is excited when he learns that a major celebrity couple - actor Sharon Tate and her husband, director Roman Polanski - have moved next door. Thinking that getting close to the couple may be his next chance at stardom, Dalton tries to approach them, but fails. When Dalton gives up hope and lets go of his long-time friend Booth due to financial issues, a life-altering event occurs that changes his and the couple’s fates forever.

Sci-fi drama “Ad Astra” clung on to fifth place with 49,000 moviegoers seeing the film at 493 screenings.

Meanwhile at the North American box office, the DreamWorks animated adventure “Abominable” topped the box office with $20.9 million in ticket sales over the weekend, according to studio estimates Sunday, while the Renee Zellweger-led Judy Garland tale “Judy” got off to a strong start.

“Abominable,” the weekend’s sole new release in the North American market, is a co-production between Universal’s DreamWorks and the Shanghai-based Pearl Studios.

The film, written and directed by Jill Culton, is about a Shanghai teenager (Chloe Bennet) who discovers a lost yeti on the roof of her apartment building. She and a pair of friends traverse China to return the creature, whom they name “Everest,” home to the Himalayas. “Abominable” garnered positive reviews (80 percent on Rotten Tomatoes) and a warm reception from audiences (an A on CinemaScore) eager for a family-friendly option.

“Abominable” marks the seventh No. 1 film this year for Universal, or eight if you count “Downton Abbey,” released by the studio’s specialty label, Focus Features. “Downton,” last week’s top film, slid to second with $14.5 million. The big-screen encore for the British series has already grossed $107.1 million worldwide.

“It’s not going to be all superheroes all the time. That’s not necessarily going to be everyone’s cup of tea,” said Jim Orr, distribution chief for Universal. “When we have films like ‘Abominable,’ ‘Yesterday,’ ‘Good Boys,’ ‘Us,’ we’re bringing a lot of different people into the theaters and that’s good for everyone. That’s good for the entire industry.”

It’s been a good run for original films lately at the box office. The stripper drama “Hustlers,” from STX Entertainment, continued to hold strong with $11.5 million in its third week, dropping just 32 percent. It’s now made $80.6 million altogether. “Hustlers” potentially got a boost by having its star - Jennifer Lopez - announced this week as next year’s Super Bowl halftime act, along with Shakira.

The two-and-a-half-month break from superheroes atop the box office is expected to end next weekend when Warner Bros.’ “Joker” hits theaters, along with Fox Searchlight’s “Lucy in the Sky” and Netflix’s “Dolemite Is My Name.”