Measures unveiled to reduce fine dust by 20% this winter

Measures unveiled to reduce fine dust by 20% this winter 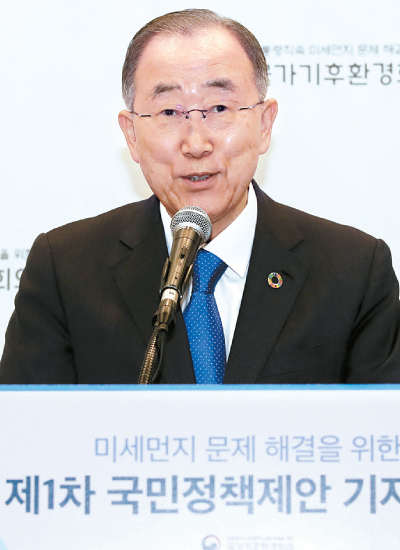 Ban Ki-moon, chair of the National Council on Climate and Air Quality, holds a press conference at the Korea Press Center in central Seoul on Monday. [YONHAP]

The National Council on Climate and Air Quality (NCCA), which launched in April at the helm of former UN Secretary General Ban Ki-moon, said during a press conference at the Korea Press Center in central Seoul that it submitted its proposals to the Blue House after passing them in an internal meeting last Friday.

In the following weeks, the government is expected to change relevant policies to put those ideas into action starting this November, the council said.

On ways to deal with emissions coming from China, the NCCA said it would share fine dust forecasts and warning alerts with the neighboring country and form a so-called Korea-China Blue Sky Partnership with Beijing to work closely together on the environmental hazard.

The group added it would also form some sort of a partnership with other nations across the world to share any of their successes.

The plans relayed to reporters this week are aimed at reducing Korea’s fine dust level by 20 percent or more from December to March compared to the same period last year.

The NCCA dubbed the four-month time span Korea’s “season of high concentration fine dust,” stressing that special attention was needed in these cold months to purify the nation’s air.

Some 1.14 million cars in Korea with the lowest level on the country’s emissions grade system, a grade 5, which are mostly old diesel cars, will be banned from being driven on roads in Seoul, Gyeonggi or any city populated by 50,000 people or more from December to March, the NCCA said.

The presidential committee said it would also raise acquisition taxes for those cars to encourage consumers to ditch them for good.

On coal power plants, the committee seeks to temporarily halt nine to 14 plants out of the country’s 60 from December to February and do the same for 22 to 27 plants in March.

Until now, the country had halted only four during springtime to reduce emissions.

The presidential council also vowed to more actively crack down on industries with the most emissions by sending inspection groups that are composed of public officials and members from the private sector to check for any illegal emissions.

Other options being considered are allowing protective face masks to be covered by health insurance and adding a lung function checkup to the national health screening program that many Koreans are required to undergo every year.

Last March, former UN Secretary General Ban accepted President Moon Jae-in’s offer to head a national agency combating fine dust as Korea was experiencing some of the worst air quality this year, which triggered a public outcry that the government was failing to confront China despite studies that showed the neighboring country was partly to blame.