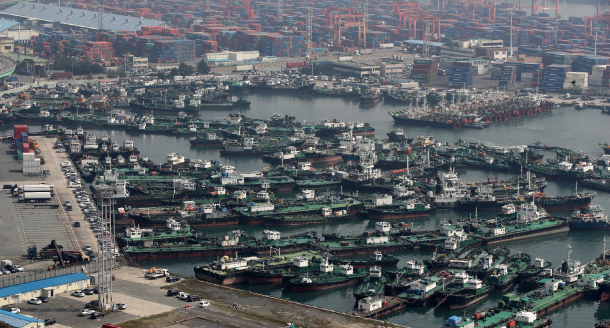 Typhoon Mitag is expected to make landfall on Korea’s southwest coast on Thursday but its strength may be weaker than anticipated after passing through Taiwan and the Chinese mainland, the local meteorological agency said.

Mitag, the season’s 18th typhoon and the seventh to affect the Korean Peninsula this year, could bring powerful winds and heavy rain to the southern parts of the peninsula, the Korea Meteorological Administration (KMA) said on Monday, calling for thorough preparations to prevent damage.

KMA forecasters said Mitag is likely to reach the vicinity of Mokpo, South Jeolla, at around 9 a.m. Thursday after passing over land located about 340 kilometers south of Shanghai at 9 p.m. Tuesday.

By the time Mitag makes landfall in Korea, the typhoon is expected to have weakened to a small-scale storm, they said. Mitag will reach waters about 90 kilometers east-southeast of Dokdo in the East Sea at 9 a.m. Friday, they added.

“The authorities are closely watching the movement of Typhoon Mitag as it could lose its strength and speed while passing through the coastal regions of Taiwan or China,” a KMA forecaster said.

Meanwhile, weather forecasters on Jeju Island said the southern resort island will come under the influence of Typhoon Mitag beginning Tuesday. Rain of 30-50 millimeters (1.2-2 inches) per hour will begin on Jeju Island early Tuesday morning and a mix of strong winds and heavy rain is forecast for Wednesday.