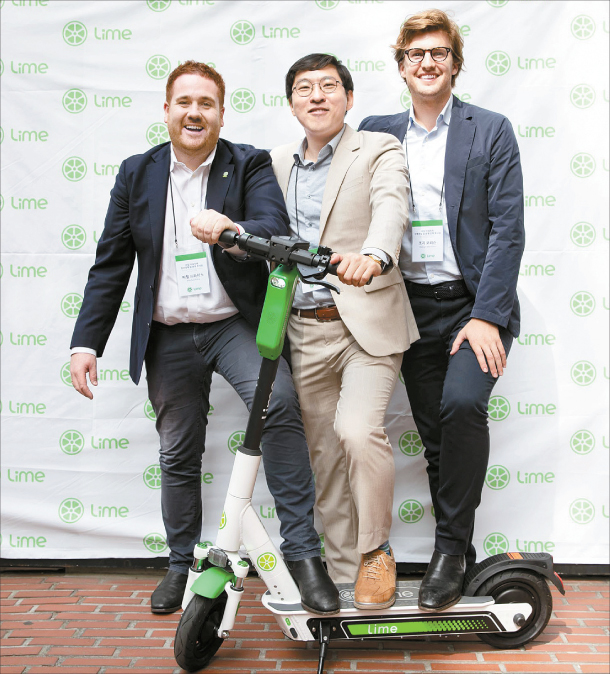 A Google and Uber-backed e-scooter-sharing service will go live in Korea on Friday.

San Francisco-based Lime has chosen Korea as its first regional location, after conducting trials in Singapore and other Asian countries.

Lime will be making its third-generation e-scooters available. It says they are safer, incorporating front and backlights. The latest model is currently only available in a few other cities, including Paris and Berlin.

Established in 2017, the company offers e-scooters and bike rentals in more than 100 cities in over 30 countries. Google’s parent Alphabet, Google Ventures and Uber are some of Lime’s investors.

“Our purpose at Lime is to reimagine urban life through the wonder of mobility,” said Mitchell Price, head of government strategy and policy, Lime Asia Pacific, at a press event held in Seodaemun District, western Seoul, on Tuesday. “We’re extremely excited to finally start Lime’s e-scooter-sharing service in Korea, a dynamic market with significant demand for increasing micromobility.”

Lime chose Korea in part because of the high concentration of people in large cities.

“We always look for cities that could benefit from this type of mobility,” said George Morrison, regional expansion manager, Lime, Asia Pacific.

Morrison said Lime sees significant opportunity in Korea, considering that it has cities with significant congestion and a lot of people who want to go out. Morrison added that Lime’s e-scooters could be especially useful for Korean subway riders who could reach their destination by e-scooter after getting off from a station exit.

Lime argues it has been able to replace 30 percent of private car use with e-scooters in cities it has entered.

Lime will start in Korea with 500 e-scooters and plans to expand to 1,000 by the end of the year. The service will first be available in Gangnam District, Seocho District and Songpa District in southern Seoul.

Lime will charge 1,200 won ($1.08) to unlock the scooters and 180 won per minute. That is higher than its rivals, including Kickgoing, Gogo-ssing and Xing Xing.

For a 30-minute ride, Lime riders will have to pay 6,600 won, which is more than twice the 3,500 won charged by Kickgoing and Gogo-ssing and the 3,000 won charged by Xing Xing for the same amount of time.

“We worked very hard on product hardware. We are bringing the most advanced and the safest electric kickboards to Korea, and we believe this form of ride deserves a fair price,” said Price.

In response to the growing safety issues involving e-scooters, Lime said it hosts First Ride events, where the company encourages safe riding, emphasizing the use of helmets and discouraging drink and riding.

Lime plans to create more than 300 jobs in Korea by next year.